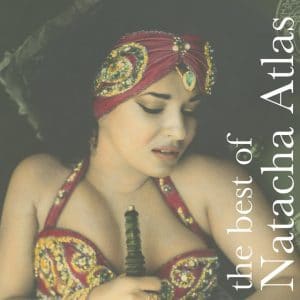 With five solo albums, numerous guest appearances and a spell fronting Transglobal Underground behind her, tiny bellydancing East-West fusioner Natacha Atlas was overdue for a Best Of. Known as much for her exotic live performances and quirky cover versions as her own writing, the Atlas way of expression is as worldly as her surname, taking James Brown, Jacques Brel, John Barry and Jah Wobble for a Middle Eastern spin along the way. One label that can be pinned on Ms Atlas is Eclectic.

Thus this compilation proves. Where other artists may have eschewed including cover versions on albums let alone a Best Of record, Natacha has clearly realised that her Middle Eastern interpretations of classic tracks are a cut above mere covers.

Alongside these sit a selection of original material from all five of the solo albums, and several of these have been rerecorded or remixed. “I decided to re-record a few tracks that I felt needed an overhaul or bringing up to date,” says Natacha. “That way the album has something new as well as old.” Very much like her whole take on music, with its ancient instruments juxtaposed with synths and modern recording methods.

Generally, it’s the newer tracks that are spared makeovers. Fakrenha, from Ayeshteni, is a classic Atlas track and appears here in its original, beguiling form. Ezzay, from Gedida, is similarly left alone, oud parked congenially alongside percussion and a string section. Kidda, released on Halim back in her Nation Records days, heads further east than the rest of the record, with a distinctly Indian beat – yet dharabuka, riqq and ney find themselves married to electric guitars and keyboards.

Like its star, this is a record not without its quirks. Too short is an update to Yalla Chant, an infectious blast from the Diaspora past. Clocking in at under three minutes, it’s nearly enough to get one’s belly out for, but flatters to deceive. A new mix of Fun Does Not Exist, in contrast, allows the listener enough time to become engrossed in the dubby drone created of Count Dubuluh’s bass, Hamid Mantu’s ethnic drumming and Walid Rouissi’s oud. Vocal samples have been added but it isn’t a seismic shift from the Diaspora recording.

There’s a nod to the energy of her live performances too with Moustahil, a “hidden” bonus track recorded live in France and tacked on to the end.

And it wouldn’t be a representative Best Of Natacha Atlas without the inclusion of her most recent and decidedly dancey material. Eye Of The Duck therefore peers out from the track listing with Princess Julianna and Tuuk vocalising over samples and backed by a bass that again verges on dub (that Jah Wobble influence again). It’s essentially a duet between Atlas and Tuuk, with Julianna on backing vox.

Towards the end of the record is a “2005 dub mix” of Leysh Nat’Arak, another of Diaspora’s entries. And it’s none other than Transglobal Underground who are responsible for the rather padded, subliminal remix.

Things take a turn for the fantastical when the strains of John Barry’s evocative orchestral strings prelude Atlas’s cover of Bond theme You Only Live Twice. This is the only song not previously recorded by our heroine on this record, and it’s a timely one, reminding us of her work on the Bond soundtracks The World Is Not Enough and Die Another Day. Natacha’s vocal style, married to Barry’s lush, cinematic score, should work therefore. There are bursts of wonderful vocals for sure, but for much of the first part of the song she sounds inexplicably flat. Worse, the spectre of Robbie Williams‘s Millennium lurks in the shadows beyond Natacha’s many veils and spangles. What should be an inspired cover instead unfortunately emerges as something rather comic, sitting uncomfortably between novelty record and commercial homage.

But her most successful cover is here too – Mon Amie La Rose, by Caulier and Lancome. Brel’s Ne Me Quitte Pas is consequently a strange omission, but maybe you can have too much of a Brel thing. Of the other covers, James Brown’s It’s A Man’s World is a take it or leave it affair, but she undeniably brings something new and flavoury to the mix.

To these ears Atlas’s most inspired take on someone else’s song was Screamin’ Jay Hawkins‘ I Put A Spell On You from Ayeshteni, and it’s no surprise to find it included here. This belter comes complete with a male choir, nahrazan, magruna, string section and not one but two programmers fusing soul, Arabic rhythm, a modern keyboards-driven sound and lyrics Natacha entirely makes her own.

Let us hope that now she’s taken to covering even her own songs, writer’s block isn’t preventing Natacha Atlas from flourishing further. For with her unique cultural outlook and musical mix, she here goes some way to proving that interpretation is as important as composition. If you’ve never heard her music before, this Best Of is a good introduction, as all Best Ofs should be. But if you have all the albums, it’s a pleasing addition when it could have been a straight repetition. One can’t ask more of a compilation record.