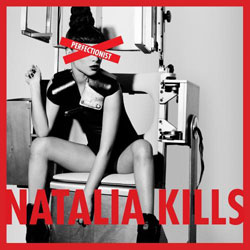 Natalia Kills’ debut album is a far cry from her first foray into the charts as Verbalicious. The one time rapper and star of The Archers has now decided to have a bash at being a pop star, and does a passable job of it. Just about.

Apparently Natalia really isn’t best pleased to be compared with Lady Gaga. This is unfortunate for her, as she opens the album with what could be a Gaga cast off. Even the delivery of her voice is a downright imitation of Gaga, which hits home with a sucker punch in the repeated hook “Take me to Wonderland” and leaves one checking that they are in fact listening to a different artist.

Free is so very close to being a solid track, and in fact if it were any other artist offering a cameo in the opening then it would be. But the instant that Will.I.Am begins his Auto-Tuned static little verse it is reminiscent of every other Will.I.Am appearance (and there have been many) in which he did exactly the same thing.

This edging towards a good track eventually does finally pay off with Zombie. With a similar industrial-pop sound as Break You Hard, we finally get a catchy melody and a decent, memorable and marginally interesting hook. It also helps that she delivers the song as Natalia Kills instead of a Lady Gaga impersonator.

Love Is A Suicide is an uninspired attempt at controversy with a tease of suicide as a subject matter, but it fails to live up to these shock tactics with cringeworthy lyrics: “It’s so surgical, how you dissect every mistake I make, you’re like an animal, you bite me hard.” And there’s an awful talky bridge. Nice tune though.

We’re back in Gaga territory (did we ever leave?) for Mirrors, although only the verses are subject to this – the chorus is great, and very catchy. Then along comes another horrible talky section which, thankfully, is brief.

But forget all that and skip straight to Acid Annie. Hands down the best track on the album, there’s not a bad thing to say about this song beyond a rather cringey “motherfucker” in the final verse. Yet forgiveness of this minor blip is easy on a track this good.

By contrast, Superficial is a rehash of Mirrors, and that wasn’t perfect to begin with. Broke is incredibly boring, and being a Brit, Natalia is not going to have much use for the dimes she’s on about in the chorus. If I Was God has a remarkably similar melody in the chorus to Kate Bush’s Running Up That Hill, but otherwise is a bit bland.

Besides Zombie and Acid Annie this album is uninspired, unoriginal and obvious. There are a few cracking tunes there, but Perfectionist is far from perfect.