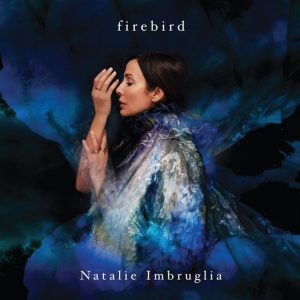 The term ‘iconic’ has been in danger of being overused in recent years, but as far as iconic ’90s images go, the video for Natalie Imbruglia‘s Torn must be up there. The one-shot video, featuring the actor formerly known as Neighbours‘ Beth Brennan arguing and then making up with future Holby City star Jeremy Sheffield transformed Imbruglia from soap starlet to international pop star.

The last decade hasn’t quite worked out though. Back in 2009, Imbruglia’s then record company decided to delay the release of her fourth album, and when it eventually came out in February 2010, it became her worst selling record to date. Apart from a covers album, Male, in 2015, it seemed that Imbruglia had decided to concentrate on other ventures: a return to acting and motherhood (her first son was born in 2019, conceived using IVF treatment).

After this long hiatus we have Firebird, Imbruglia’s first album of original material since the ill-fated Come To Life. It’s an appropriate title, with its illusions to a phoenix, as Imbruglia sounds like an artist reborn. It’s an album full of instantly likeable pop anthems, with some guest spots from the likes of KT Tunstall and The Strokes‘ Albert Hammond Jr.

Despite being written long before the pandemic, Build It Better taps into the zeitgeist, with its title so close to that phrase beloved of politicians around the globe attempting to vision a post-lockdown world. In Imbruglia’s case, there’s a more personal touch to it, given her career and relationship highs and lows, but it’s a sunny, optimistic blast of guitar pop that effortlessly ushers Imbruglia back into pop stardom.

That air of optimism is coursing through Firebird’s veins, possibly making it the record we all need in the weird days of 2021. What It Feels Like seems to nod towards Andrew Gold‘s ’70s classic Never Let Her Slip Away, and features a big, glorious chorus, while Tunstall’s co-write, Nothing Missing, is the kind of shiny, uplifting pop song we’re accustomed to her producing.

There’s also flashes of anger – Maybe It’s Great reads like a ode to Imbruglia’s ex-husband (“Was it ever happy ever after, all the shit that we’ve been through”), and the ’80s sheen and Hammond’s guitar drives the song forward relentlessly. Just Like Old Times also touches on relationship woes, but from a different angle: all understated, breathless beats and handclaps, full of nostalgia and yearning for the past. It’s a genuinely moving ballad and could be the best thing on the album.

There are some quibbles to be had – at 14 tracks, it’s a bit too long, and sometimes the second half of the album threatens to collapse into formulaic pop-rock territory. Yet that running time is understandable when Imbruglia has a decade’s worth of songs to catch up on – and the closing title track makes for a nicely valedictory postscript to the album (“Let me go… it’s time to fly”).

For those of us who still think of Imbruglia’s debut, Left Of The Middle, as one of the most underrated albums of the ’90s, Firebird serves as a decent reminder of what a good songwriter and strong singer she can be. And, at a time when artists from Lorde to Haim are namedropping her as a big influence, this could be an album that introduces her to a whole new audience.