Natalie Merchant – Paradise Is There 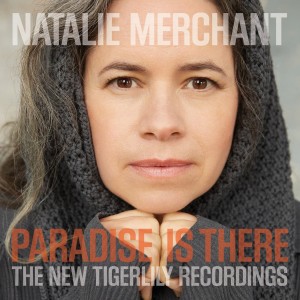 Tigerlily, the 1995 debut album by former 10,000 Maniacs vocalist Natalie Merchant, sold over five million copies which – even allowing for music industry’s subsequent commercial decline – is hugely impressive. Its songs have been mainstays of Merchant’s live sets ever since and, to mark the album’s 20th anniversary, Merchant has revisited the album. Paradise Is There, a track-for-track Tigerlily cover album, is the result. The album is accompanied by a documentary containing live performances, archival footage and interviews with Merchant’s peers.

Tigerlily has aged well, mainly thanks to the fact that its musical palette – acoustic guitar, piano, brushed drums and the occasional blast of electric guitar – is so reserved and, consequently, timeless. Paradise Is There doesn’t seek to drastically reimagine Tigerlily’s songs, as Kate Bush did with her back catalogue on The Director’s Cut. Instead, Paradise Is There reshuffles Tigerlily’s running order and pares back the originals’ arrangements even more: this is not so much Tigerlily Unplugged as Tigerlily Even Less Plugged. Perhaps the biggest change is the addition of some luxuriant string arrangements and the toll of time on Merchant’s voice, which has a slightly grainier quality than it did back in 1995.

The results are expectedly pleasant. The new version of San Andreas Fault loses the original’s coy funkiness and adds a rawer vocal take, some brushed drums and tinkling vibraphone. Tigerlily’s (relative) bangers have had their impact muted: the bluesy guitar part on Carnival has been snipped, Where I Go’s perky samba has been relocated from São Paulo to Paris via the addition of some rambunctious accordion, while the new arrangement of Wonder is perhaps the most radical – it’s been transformed from a strident rocker placed at track two in Tigerlily’s running order to a delicate, slow, acoustic positioned at the album’s end.

Given the similarities between the two albums, it’s inevitable that Paradise Is There shares Tigerlily’s weaknesses (sameiness, sentimentality) as well as its strengths (gracefulness, melody). But sometimes Paradise Is There exacerbates the original album’s faults. For example, The Letter is pointlessly elongated to nearly double the original’s length courtesy of some pretty but pointless string interludes. It’s particularly unwelcome when five of the 11 tracks stretch beyond the five-minute mark. Tigerlily was overlong; Paradise Is There is longer still.

Those who are justifiably fond of Tigerlily will find much to enjoy here. But it’s a shame Merchant didn’t take the opportunity to shake up the original album a bit more. It leaves Paradise Is There feeling like a bonus disc orphaned from its parent album – pleasant but entirely inessential.