Nathaniel Rateliff – In Memory Of Loss 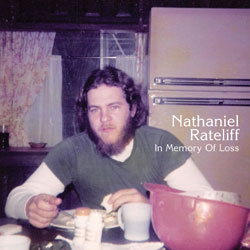 It takes some confidence for an artist only 16 months into their professional career to make an album as sparse and gentle as In Memory Of Loss. Yet Denver-by-way-of-Missouri songwriter Nathaniel Rateliff’s laid back vocals ooze with easy going charm. Comparisons to the likes of M Ward and Bill Callahan are on the money and it’s no surprise that he has toured with Bon Iver and The Low Anthem, and that producer Brian Deck has worked with Iron & Wine. And yet there are shades of the more mainstream sounds of Snow Patrol and Coldplay in the ever-so-slightly noisier chiming guitar intro of Shroud and the piano refrain and verse of Happy Just To Be.

Opening with the light, hushed sway of Once In A Great While, Rateliff sets out his stall early. Early Spring Till is the first taste of the wonderful close, textured harmonies that characterize much of the album. While harmonicas lift bar-room brawl tale You Should’ve Seen The Other Guy, drums suddenly feel hugely prominent on A Lamb On The Stone due to their absence from so many previous tender, lilting tracks. It shows a great maturity to create a feeling of variety in the instrumentation to sustain an album that is so consistent in its low-key mood and tone.

At 16 tracks this could feel like an epic, yet none of the tracks outstay their welcome; rather, very brief vignette When You’re Here seeming insubstantial. It would be interesting to hear him drop a song or two and instead try extending some of them beyond their very radio friendly lengths to reach an emotional crescendo, the way someone like Matthew Phosphorescent Houck does. The raw lyrics certainly suggest enough experience of angst and pain to think that he could go there and be less reined in. It’s intriguing that an album containing titles like Whimper And Wail and such pessimistic lines as “it does no good to talk about anything” and “is there a blanket of pain I can wrap up in” was apparently written to woo a woman. If you’re wondering how that went, he’s now married to her.

Artists like Bon Iver have shown that fragile songs and arrangements can still have huge substance and impact and be strangely uplifting. Rateliff has got a little way to go before he really earns his place alongside such greats. Yet on the evidence here, good things are to come for this incredibly promising talent and his longtime collaborators Julie Davis (bass, vocals), James Han (piano) and Joseph Pope III (guitar, vocals).