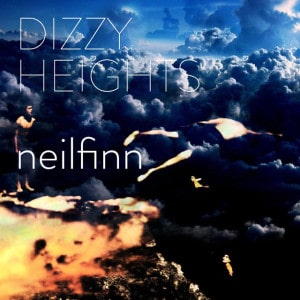 Solo-wise, Neil Finn hasn’t been particularly productive over the last two decades, with Dizzy Heights his first solo album since 2001’s acclaimed One-Nil. Still, he’s been incredibly busy; in-between there have been three Crowded House albums, his 7 Worlds Collide project, one album made with his brother Tim and 2011’s effort as part of Pajama Club with wife Sharon, which took many by surprise with its lo-fi ESG inspired funkiness.

Indeed, for Dizzy Heights Finn sprang something of a surprise again by drafting in highly esteemed producer Dave Fridmann, perhaps most known for his work with The Flaming Lips and Mercury Rev. From the outset, the prospect of Finn and Fridmann working together sounds tantalising: one of music’s most admired songwriters alongside one of its most acclaimed producers.

Opener Impressions has a laid back and rather spacey feel to it, a cross between the psychedelic essence of Mercury Rev with the strings and depth you’d find in the work of Paul Buchanan and The Blue Nile. It has a sort subtle, sweeping quality to it without being overwhelming. Title track Dizzy Heights follows, with Fridmann pushing the dreamy-sounding production further with Finn’s vocal sounding a little Jeff Lynne at times. In fact, the very well-arranged strings actually lend an ELO touch to this while still having a rather hazy, halcyon feel to it.

At times Finn’s vocal has a weightlessness to it, rising freely. Flying In The Face Of Love is one example, with his vocal a satisfying contrast to the swagger provided by the lead guitar and bass. Divebomber is another, although this certainly doesn’t have any sort of swagger attached to it. This is very firmly in the Flaming Lips and Mercury Rev mould, with bold sounding horns against a blanket of strings, snare drum and appropriate dive bomber effects (in fact it’s inspired by the WWII film of the same name). Very much a sense of dizzy heights here.

Better Than TV sees a very confident sounding Finn get amorous (“Come on baby, I want your love to be…strong enough to rise above me”) against a memorable mix of beats and rising strings, with Fridmann’s production again lending a textured breadth and scope to the sound. Meanwhile, Pony Ride isn’t too far removed from Split Enz period Finn, again sounding confident and again Fridmann making it feel expansive – especially in the latter part of the track.

In contrast, White Lies And Alibis, at almost six minutes, brings something a little more unusual and experimental with constant ride cymbal going against layers of guitar, strings, other percussion and lo-fi loops, as well as sudden changes in rhythms and tempo. All rather unpredictable and at times opaque sounding, but welcome all the same, if rather unexpected.

The remainder of the album takes us back into more familiar territory, albeit with some twists; Recluse achieves an epic rock-pop air to it as female backing vocals and strings blend together beautifully, while the introspective In My Blood has a persona reflecting on their life and wishing they “could come back again”. It’s difficult to tell whether the persona is dead or on the verge of death, but the contrast between the subject and the hopeful melodies in the background make this a particularly notable track.

In promoting the album, Finn said: “I didn’t want to make it a solo record in a stripped back singer-songwriter sort of way. I had a feeling [Fridmann] would be good at adding some odd shapes to the music. Which I always welcome – making things a little more expansive.” This is certainly the case and it works well – very well, actually. It does seem that “dizzy heights” is a rather apt title: it permeates the record, whether that’s just Finn’s vocal, the songs themselves or the production.

It’s great Finn has given us a solo album again, especially with Fridmann’s inspiration throughout. They’re certainly a partnership and there’s lots of adventure here. Dizzy Heights is certainly as inspiring as anything Finn has produced for a long time.