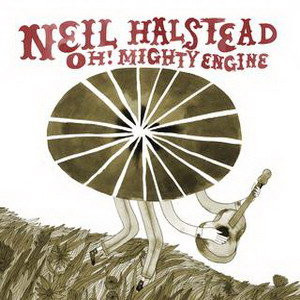 Although he is best known for his work with shoegaze pioneers Slowdive and folk popsters Mojave 3, Neil Halstead has quietly staked out a solo career that began in 2002 with the beguiling Sleeping On Roads.

On this, his second solo release, Halstead has ended his long association with 4AD, moving over the Atlantic to sign with fellow surfer Jack Johnson‘s Brushfire imprint. If this is an attempt to court a different audience then Halstead may be on to something. The gentle acoustics and murmured vocals that dominate Oh! Mighty Engine will surely appeal to fans of Johnson’s laidback vibe, one that Halstead will no doubt have noted has reaped major commercial rewards.

The musical reference points that punctuated Sleeping On Roads are even more dominant on Oh! Mighty Engine, with Halstead completing the transition to fully-fledged folk rock artist. Lazy comparisons will be made by some writers to Nick Drake and Bert Jansch, but there is no denying that the wistful vocals, oblique lyrics and finger picking guitar style tick off all the necessary pointers on that particular checklist.

The opening title track is a deceptively simple song that breezes by on a strong melody and pedal steel guitar, but it is relatively upbeat in comparison to what follows. This is an album that tends to wash over the listener on the first few playbacks, with Halstead rarely straying from the basic acoustic guitar/vocal blueprint. It takes time for the vocal hooks on Witless Or Wise and No Mercy For The Muse, or the stuttering drums and spare piano on the charming but gossamer light single Paint A Face, to sink in.

The latter track is indicative of Halstead’s attempts to steer into the folk pop territory that has proved so successful for Johnson. He repeats the trick on Queen Bee, Sometimes The Wheels and Always The Good, although the latter’s use of synthesizer and poppy drums is somewhat out of place with the general tone of the album.

Halstead saves the best to last, with the closing three tracks all boasting sublime melodies, intricate arrangements and delicate touches. The closing Baby, I Grew You A Beard may be a reference to Halstead’s newly hirsute status, but is also typical of his penchant for lyrics that never quite cross over the border of clarity.

In the long run, you get the feeling that the self-effacing Halstead would be more than happy spending his time surfing in his beloved Cornwall than touring stadiums with Jack Johnson. Commercial considerations aside, this is a finely crafted and lovingly realised album that Halstead should be proud of, and which deserves to finds its way into more homes than the usual coterie of 4AD fans.