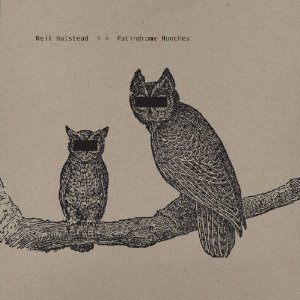 Since Neil Halstead first appeared with the much revered Slowdive, he’s been making music to get lost in. From shoegaze beginnings, he moved on to grand Amerciana soundscapes with his next band Mojave 3. Since that band went on indefinite hiatus Halstead has concentrated on stripped back solo releases, and Palindrome Hunches represents his third such album.

Ordinarily, stripping away the mechanics of noise makes for a more direct approach. When armed only with an acoustic guitar and a voice, there’s almost nothing to obscure the performer from his audience, barring devilish wordplay and the unobtrusive support of his band. Yet somehow Palindrome Hunches is a surprisingly difficult album to interact with fully. Halstead seems to have found a way to write simple folk songs and to make them wisp-like, capable of fading in and out of the conscious mind on a whim. To say that these are dreamy songs would be incorrect; there’s enough melancholy here for Halstead to induce nightmares should he wish. But there is something remarkably hazy about the album that means that it drifts along, opening and closing doors in the mind as it goes. As such, this is an album that facilitates reflection and introspection. Every so often it is possible to focus on the stories that Halstead is telling, but more often than not this is an album to get lost to, rather than in.

All of which might suggest that Palindrome Hunches might be a little tedious or boring, but that is far from the truth. It possesses undeniable warmth that is in clear evidence on opening track Digging Shelters, which finds Halstead hunkering down in the snow but providing protection with the gentle timbre of his voice. Simply crafted though the song may be, it is heartbreaking in tone and curiously welcoming too. In lines like “put my headphones on and I won’t hear a sound” he seems to be suggesting that music can provide an escape and, as Bob Dylan might have said, shelter from the storm. It’s something this album is capable of doing from start to finish.

This is fortunate, because under the skins of many of these songs is a knot of hurt and bruised emotion. Explorations of damaged relationships in Tied To You, Sandy and Spin The Bottle or the imagined musings of the concert pianist Paul Wittgenstein who lost his arm in World War One – and his brothers to suicide – are made bearable by Halstead’s delicate intonations and wonderful guitar work. Elsewhere, the spirit of Nick Drake hangs over the album, most obviously on Full Moon Rising, but there are hints of Pink Moon and Five Leaves Left on many of these songs.

Despite these somewhat bleak inspirations, there are moments of hope that shine through. The upbeat Hey Daydreamer has a pleasing skip in its step and positivity in its lyrics, whilst the tinkling title track comes across like a cross between a nursery rhyme and a cryptic crossword. Ultimately there’s a raft of emotions wrapped up in each of these songs, and with the assistance of rural musicians from Band Of Hope the lines are frequently blurred. The violin of Ben Smith in particular provides an array of emotion from sorrowful swells to unnerving interjections (Tied To You).

Despite its apparent simplicity, Palindrome Hunches is quite a complex album and one that will take time to grasp and appreciate fully. Not only are these songs introspective but they are inclusive too. The quality, depth, and otherworldliness that Halstead has achieved here elevates it above being just another folk album. Rather, Palindrome Hunches is really quite wonderful.