by Daniel Paton
published: 26 May 2014 in Album Reviews
Tweet 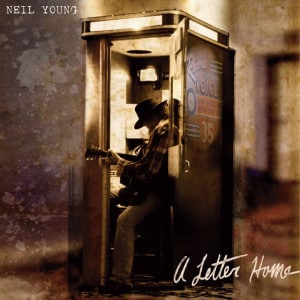 Neil Young’s contrarianism remains his most dogged and persistent characteristic. In advance of Record Store Day, he teased his audience by promising a long awaited reissue of the cult classic live recording Time Fades Away, perhaps one of the most notable albums still unavailable on CD.

Instead, what he actually delivered was A Letter Home, a collection of – don’t call them cover versions – works by other canonical songwriters (Bob Dylan, Bruce Springsteen, Gordon Lightfoot, Bert Jansch and Willie Nelson amongst others), recorded in single takes in a voice-o-graph machine belonging to Jack White. It has superficial similarities with Springsteen’s Seeger Sessions or Dylan’s Good As I Been To You and World Gone Wrong, albums of interpretations that reignited those musicians’ own songwriting flames.

The old world approach to recording A Letter Home is all the more bizarre given that Young seems to have devoted the greater portion of his recent energy to developing the Pono player, a high quality digital audio system. What we have here is perhaps the polar opposite – a set of analogue recordings imbued with deliberate imperfections and 1930s style crackle and static. Once again, Young seems to be mischievously undermining his own projects. Not only this, but whilst Psychedelic Pill seemed to have revived his sense of focus and purpose with Crazy Horse, this is an even more stubborn and peculiar record than Americana or even Greendale.

Young’s occasional tendency for whimsy and sentimentality also gets indulged here too. The album is bookended by two parts of the eponymous Letter Home – a voice recording addressed to his deceased mother. This is either touching or mawkish depending on each listener’s tolerance levels.

Nevertheless, A Letter Home is not without its considerable charms and is in many ways really quite clever. The near-claustrophobic conditions of the voice-o-graph booth (three feet by four, with the door left open to capture Jack White’s piano for a few songs, including a honky tonk take on Tim Hardin’s Reason To Believe) inspires performances that are not just intimate, but raw and unpolished. There is also something weirdly fascinating about taking classic rock and folk songs from the ’60s and ’70s (along with a couple of lurches into the 1980s) and applying to them much earlier sounds and recording techniques. It is almost as if Young is searching for a curious kind of reverse anachronism.

Songs like Bert Jansch’s Needle Of Death have obviously inspired Young (and he of course has his own take on this subject with The Needle & The Damage Done). Here, his voice is vulnerable and frail, but also completely immersed in the song. Young claims his aim here was to get to the ‘essence’ of the song by capturing a performance free from production intervention. Given the subsequent addition of noise to age the sound, this is a little disingenuous – but Young’s dedication to the art of song craft and his deep appreciation and understanding of this music comes through in his mostly empathetic delivery.

Sometimes the crackle and hiss outlast the performance. This produces an effect similar to the pause between the conclusion of a performance and the beginning of applause during a classical concert – a moment to contemplate and absorb his rendition of the song. There’s an iconoclasm here for sure – most specifically to do with the way Young approaches people’s expectations of his own work, but there’s also an elevated reverence too for these old masters.

Sometimes Young sounds completely at home in this context (Early Morning Rain) – but at other times, the rudimentary recordings find him only just beginning to get beneath the skin of a song (he seems to be fumbling through the changes during Crazy, and he completely divests the song of Patsy Cline’s aching melodrama). He often seems to be striving to strip away anything that might be considered artifice or embellishment. His version of My Hometown seems to be a curiously harsh and aggressive reading, lacking the synthetic warmth of Springsteen’s original, during which he plays with the phrasing and chord changes. At other times (Willie Nelson’s On The Road Again), Young seems in endearingly ramshackle shape.

During the final part of the Letter Home – Young says “I’ll be there eventually, but not for a while though. I’ve still really got a lot of work to do here.” Like Dylan and Springsteen, Young seems to be raging against the dying of the light – constantly seeking new approaches and contexts for a writing style that might otherwise seem stoical and unwavering. Some will find A Letter Home something of a gimmick and it’s hard to see it being anything other than a peripheral addition to his substantial catalogue. Nevertheless, there’s little denying that it seems to have been a highly personal and idiosyncratic project for Young – a moment that finds him contemplating mortality but very much still celebrating life.