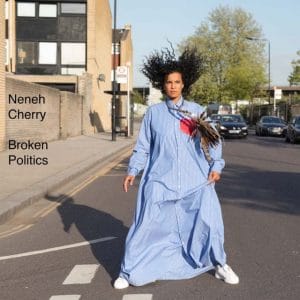 It’s nearly 30 years since Neneh Cherry burst into our consciousness, performing Buffalo Stance on Top Of The Pops while – gasp! – heavily pregnant (something that was considered a pretty revolutionary act in 1989), and releasing one of the defining albums of the times in Raw Like Sushi, an album that still sounds as fresh and relevant today as it did at the end of the ’80s.

After her 18-year hiatus, Cherry returned four years ago with Blank Project, which saw her recruit Four Tet‘s Kieran Hebden on production duties. It’s obviously a collaboration that suits both parties, as Hedben has returned to produce Cherry’s fifth solo album, Broken Politics.

Broken Politics follows on quite neatly from Blank Project – there’s the same lovely, laid-back feel, with Hebden providing an almost pastoral soundtrack, throwing harps, reflective piano chords, xylophones and restless beats into the mix. Above it all is Cherry, still sounding magnificent after all these years, with a defiant, proud tone to her voice.

Blank Project was a very personal project for Cherry, dealing with the death of her mother – as the title suggests, Broken Politics takes on a far more global view. Kong looks at the refuge crisis, Shot Gun Shack is about gun violence, while Faster Than The Truth looks at the spread of misinformation in a global news environment.

It’s the latter track that’s one of the standouts of Broken Politics – beginning with a shuffling drumbeat that recalls Paul Simon‘s Fifty Ways To Leave Your Lover, before Cherry’s half-spoken half-sung vocals kick in. The aforementioned Kong is another highlight – featuring Robert Del Naja aka 3D of Massive Attack, there’s a definite Blue Lines vibe to the song, a low-key, slow burner of a protest song with lines like “love is big in every land, every nation seeks its friends in France and Italy and all across the seven seas”.

There’s such a relaxed, laidback atmosphere to the record that the steel drums and blasting air horn of Natural Skin Deep comes as quite the shock – but it’s a welcoming jolt rather than anything too grating. When a sample of the late Ornette Colman (a friend of Cherry’s and a frequent collaborator with her stepfather Don Cherry)’s saxophone appears halfway through, it only cements its disorientating, dizzying feel.

Natural Skin Deep is pretty much an outlier though among the rest of the album – Hebden’s meditative production recalls Björk at times, and Deep Vein Thrombosis, probably the most wistfully beautiful song to be named after a fatal medical condition, manages to sound both desperately sad and also full of wonder, a trick that everyone’s favourite Icelandic pixie can also pull off.

Anyone looking for party bangers may be disappointed (apart from Natural Skin Deep) but Broken Politics is the sound of an artist growing and maturing very nicely. These are intelligent, beautifully crafted songs to sink into and luxuriate, and tracks like Black Monday and Synchronised Devotion will live with you for months after first hearing them. Our politics may be broken, but Neneh Cherry remains one of our most vital and interesting voices around.