New Build – Pour It On 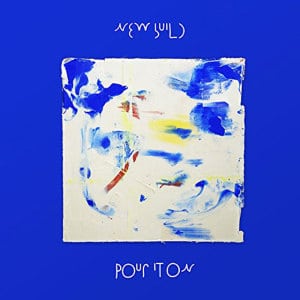 In the midst of all these different Hot Chip side-projects, such as Alexis Taylor‘s jazzy improv outfit About Group and Joe Goddard’s house-heavy The 2 Bears, one can be entirely forgiven on missing out on New Build (comprised of Al Doyle and Felix Martin) entirely. It could well be that by the time Yesterday Was Lived And Lost came out in March 2012, the wheels were already in motion on the outstanding In Our Heads. However, given all the positive acclaim that the duo acquired, it’s still slightly puzzling that their winning formula didn’t attract more attention in retrospect, at least.

Pour It Out isn’t a conscious attempt to correct this oversight but, with their ‘day job’ still in the process of making LP6, they finally have a proper opportunity to earn their moment of glory. Compared to their debut, it’s more mechanical in terms of production (some of the organic elements seem to have disappeared entirely) and, whilst not going completely minimal, have focused on being even more expansive than before.

The Sunlight is a lengthy introduction and one that can justifiably act as either the perfect wake up call or the soothing comedown in the small hours. It takes its time to build, after a lot of expectant humming and repeated mantras, before the beat drops to give the track an extra kick. On the other side of the spectrum, the title track that closes the record is just as adventurous and continually builds until the arpeggios and rolling drums become too much to handle.

All this exploration is well and good, but they’re not sure-fire dancefloor fillers. Thankfully, Doyle and Martin aren’t lacking in that department. Nearly a decade of creativity has seen them develop into solid craftsmen and it shows in some of their more direct moments where the melodies are more expressive. Look In Vain throbs away with a euphoric chorus that subtly shifts through the gears whilst Weightless feels like a more muscular take on ’80s disco. Even some of its more atmospheric tunes are enthralling. Different Kind is an eight-minute epic with the tempo constantly set on ‘turbocharge’ and Luminous Freedom rides a wave of buzzing synths and popping bass.

With all that in mind, it makes it essentially disappointing that Pour It On isn’t without fault. Doyle is certainly not the strongest singer and it shows on softer songs like Witness and Your Arrival. If anything, both songs overall feel a little lightweight. Meanwhile, the politically charged Strange Network (lyrically influenced by the recent NSA snooping shenanigans) unceremoniously plods along.

Is Pour It On the album that garners more attention for New Build? Despite the solid highs, there’s nothing truly spectacular and the end result is rather uneven in terms of quality. There are plenty of aspects of New Build’s sound that will encourage the more curious and devoted Hot Chip fanbase to adore it with open arms. For everyone else, this is a mixed bag.