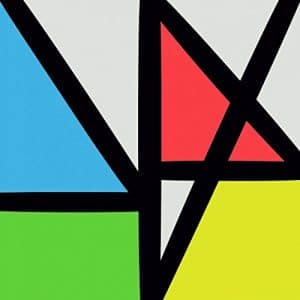 For most bands, one career resurrection in the face of adversity would be impressive enough; to do it three times is simply remarkable. New Order have always been a band battling conflict, despair, triumph and tragedy. Theirs is a career that has endured for almost 40 years, yet at the turn of the decade, it seemed that the New Order legacy was in ruins.

Following a long and bitter fall out with iconic bassist Peter Hook, it seemed that the remainder of the band were destined to peter out with a whimper, for few could see how the band could continue. To come to that conclusion though would be to underestimate New Order’s resolute will and pure love of music. Music Complete, the album they have created from the ashes of a messy fall out, is in the circumstances something of a triumph.

Music Complete is New Order’s ninth studio album proper and their first of new material in exactly two years. Right from the Kraftwerk redolent title (a group who were instrumental in developing Joy Division into New Order); it’s the sound of a band reborn and blisteringly confident. It’s as if their only deliberation before making the record was to say: “Right, let’s be New Order.” As such, this is a classic sounding New Order record that bears relation both in sound and spirit to those glorious highs of the 1980s.

Of course, while Peter Hook left another person who is arguably equally as synonymous with the New Order sound is Gillian Gilbert. When the band re-emerged in 2001 with the patchy Get Ready album, they never truly felt like New Order with Gilbert absent caring after her and drummer Stephen Morris’ young children. Here, she is front and centre on the sort of album New Order fans have been craving for years. This is an electronic record, and the sound of an electronic pop group. For many, New Order were the electronic pop group of the ’80s. Fittingly, Music Complete provides copious dance floor indebted thrills.

Opening track Restless immediately introduces a classicism present throughout the record. It’s crisp, clean and pure. It’s a sound of a band pushing in the same direction rather than rocky guitars overpowering increasingly marginalised synths. Singer and guitarist Bernard Sumner has spoken about falling back in love with synthesisers for this album, and it’s clear that he is wonderfully at peace with his place as an instantly recognisable guitarist as well as an electronic pioneer. This symmetry of sound and approach makes for the most coherent New Order record since 1989’s Technique.

Where Music Complete is particularly striking is in the clutch of long euphoric dance tracks that make up the thrilling heart of the album. The pulsing Singularity, produced by The Chemical Brothers’ Tom Rowland, is the freshest New Order have sounded in decades. The insistent electro pulse builds to a whooshing crescendo complete with a huge drop. Even more excitingly, there’s a great song in there as well as Sumner delivers some traditionally oblique lyrics. To hear New Order in full flow making a proper dance track again is a joyous experience.

Elsewhere, the album is full of mainly six- or seven-minute songs that are strikingly diverse and always compelling. Plastic brings to mind classics like Bizarre Love Triangle and combines its contemporary house feel with all the elements of classic New Order alchemy. A word must be given as well for Hook’s replacement bass player Tom Chapman, whose bass is a subtly brooding presence throughout. He provides a more than able replacement for the esteemed Hook.

Music Complete is also notable for featuring some specially selected guests. La Roux’s Elly Jackson provides wonderfully complementary vocals to Sumner’s familiar tones on the playful, upbeat Italo Disco of Tutti Frutti as well as the bubbling Nile Rodgers style funk of People On The High Line. Iggy Pop’s guest appearance on the dark and brooding Stray Dog is less successful though and is one of the records few missteps. Here, Iggy provides a spoken-word reading of a Sumner poem over a dark instrumental backing. Despite the intriguing lyrical quality of Sumner’s first recorded poem piece – “The secret of all happiness is unconditional love” – the track is something of an anomalous outlier. Far more successful is the swooning closing ballad Superheated, which features long-time New Order acolyte Brandon Flowers. On an album that’s mostly concerned with making dancefloor slaying electronic epics, it’s nice to close on a lovely pop hook illuminated by a wondrous chorus. It shows that New Order can still do it all.

Music Complete is certainly not a faultless album and is perhaps three tracks two long. But its glorious success in even coming to fruition overpowers any minor quibble. It’s the album that New Order fans have been dreaming of for years and it will no doubt be cherished. Even better, you don’t leave this album thinking it’s a good way to go out. For the first time in decades, you leave thinking: what a way to start.