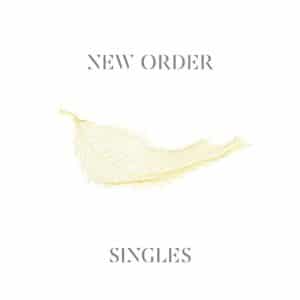 Genius. Simply, pure genius. No doubt, no hesitation. New Order kings and queens of disco melancholy. Rhythm, beauty, melody and bass. God like genius award from the NME. A trifle. You know that Pope Benedict is addressing the calls for their beatification as a matter of urgency. Touched by the hand of god, the perfect kiss, heaven in their hands.

Singles is the perfect review for New Order. All 30 singles, from the brittle sackcloth of Ceremony to the sleek, surging Waiting For The Sirens’ Call. See, they hail from a time when bands didn’t release singles from LPs. Bursting with so many thrills and pills that they dropped faultlessly formed blasts of music on matt black 12″ singles. Songs full of languid grace and thumping beats. The Manc fab four. Effortlessly cool and arty.

The shadow cast by Ian Curtis’ death, the weight of the myth of Joy Division would have been enough to bury most bands. That New Order not only rose above and did not buckle as people but exploded in a riot of electro, programmed drums and gruff honest humour is a miracle. When U2 went all postmodern and swish they where attempting to ape New Order’s jump from the ashes of the past. With U2 it always felt like a mask, a game, a ruse and now they are back grinding out rock music in a thousand shades of grey, with New Order it was a love affair, a taste for New York high life mixed with Manchester low life. The art of parties. It shows in the energy rush, the glee and vibrancy of the music.

Blue Monday is often labelled with inventing indie dance. Sure its huge success brought the sound out of the left-field and on to Top Of The Pops but you can hear the stirrings on Everything’s Gone Green and the majestic Temptation. Bernard Sumner’s Chic via Salford guitar playing on Temptation is the sound of their past being unstitched and shrugged off. The long overcoats of Joy Division crashing to the floor revealing (if not gold lame, that comes in the video for World In Motion) then reds and blues where once was only grey. In the “woah woahs” of the refrain you can feel the relief, the light at the end of the tunnel. Memories cleansed, the future imperfect

Enigmatic single, followed enigmatic single. Along the way they invented the blueprint for much of the mid ’80s indie.The Cure, in hyper poppy style and Depeche Mode owe much to the trailblazing of New Order. Depeche Mode’s Enjoy The Silence is New Order in fetish gear. The bassline is pure Hooky. Subculture is a Pet Shop Boys wet dream. Their sound can be heard in artist such as The Killers (named after the fake band in the Crystal video) and Franz Ferdinand, who think making dance music with guitars is radical. New Order were doing that in 1982.

Not content with re-imagining the limits of pop music, they also provided the cradle for acid house, their club the Hacienda becoming the Northern Mecca for the first generation of ecstasy fuelled ravers. Their finger has always been on the club pulse, leading where others follow. True Faith is an ode to drug use that sounds like a hot air balloon ride to heaven. Fine Time is Barry White meets acid house in a crumbling canal side warehouse, Regret a comeback greater than Liverpool’s in the Champions League. If you have any interest in pop music then sell your soul to buy this. At that price it’s a bargain.