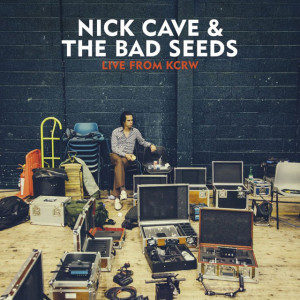 Come Christmas Day, when old Saint Nick sinks down into his chair, glass of sherry in his hand, paper hat on his head, and takes a moment to reflect on his annus, he can afford to crack a smile. Because 2013 has been a good year for him and The Bad Seeds.

The year 2013 has included a wonderful, slow burning album (Push The Sky Away), that introduced itself with little fanfare, then stood in the corner tapping its watch, waiting for you to catch up. They’ve also shown they can still scorch the (live) earth like few other acts, balancing the beautiful and the visceral with untouchable skill. Best of all, they got to share a stage with Kylie Minogue again.

That’s not bad for 12 months. It makes Live At KCRW the golden bow atop the massive present. The proud cherry, soaked in liquor, glistening with a sugar coated glaze at the peak of the multi-layer gateaux. The gilding of the lily?

Actually, no. It’s not the most vital record you can pull from The Bad Seeds’ canon, but Live At KCRW still has an enormous amount of charm. It captures an easy going, relaxed performance from a band who are easy going and relaxed because they know that, should the need arise, they could still reach over and rip out your throat.

It is a bit of a shame that here they never quite do so, because the contrasts are maybe the best thing about The Bad Seeds live. They’re the difference between the bits where Cave stands on the barrier thrusting his crotch at people and screaming “just count the holes in the MOTHER. . FUCKER’S. . HEAD!” and the graceful melancholy romanticism of songs like People Ain’t No Good or Far From Me. Both are on this album, and sounding fantastic. And both are performed with an eerily calm approach. Everything is. We get a laid back sounding Cave asking “What’s next?” after Far From Me, being hit with a litany of unlikely requests (“Nick The Stripper!”) before remarking with a chuckle “Eventually, you’ll say one of the songs on this very short list here”.

The Zen, deep-pool tranquillity of Live At KCRW is best demonstrated by what happens to The Mercy Seat. Not the bucking, snorting ride into hell in a rickety handcart of yore, instead a hymnal procession to a solemn end. The approach does mean you focus more on Cave, whose voice is ageing like a leather armchair: becoming more supple, more textured and more comfortable. It imparts the songs here with an epic sense of hard-worn wisdom that is magnificent.

While Live At KCRW is probably little more than a footnote in the on-going story of The Bad Seeds, it’s a pretty damn good footnote. It doesn’t add masses to the plot, but nor does it throw an iron bar onto the tracks of the narrative. It means Nick Cave & The Bad Seeds end the year as they began it: demonstrating they are a band in very fine health.