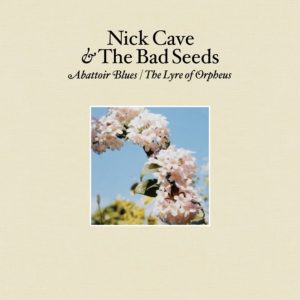 With all the fire and brimstone in Nick Cave‘s past songs, it’s a wonder he didn’t draft in a Gospel Choir long ago. He has now, and the collaboration is just as good as you would imagine: Cave’s voice like a monster from Hades contrasting with the soaring sound of the London Community Gospel Choir, and the whole underpinned as ever by that multi-talented bunch of miscreants, The Bad Seeds, now supplemented by James Johnston (Gallon Drunk) making his debut on organ.

After what many felt was the disappointment of Nocturama this double album has been eagerly awaited. All The Bad Seeds are reported to have been involved in the recording process – presumably a good thing for them, though whether it helps the overall sound I’m not convinced. Both these albums have a rougher, less produced feel about them than either Nocturama or No More Shall We Part.

Those that yearn for the older, anarchic Cave will no doubt prefer Abattoir Blues, while the sensitive flowers among us will find The Lyre Of Orpheus tends to stay in the CD player for longer. Not that there’s a hard and fast distinction, each album having its crossover moments.

Abattoir Blues provides an apocalyptic view of a world gone mad, bad and definitely dangerous. The title track is the most impressive of the songs in this vein – a basic, relentless beat, simple chords and highly sinister lyrics. “Everything’s dissolving, babe, according to plan / the sky is on fire, the dead are heaped across the land / I went to bed last night and my moral code got jammed…” Vintage Cave, in other words. Messiah Ward is calmer but no less unsettling, a minor key continuo and soft gospel singing bringing beauty to a tale of personal and global madness. It’s one of a couple of songs to borrow imagery from Auden and blend it with one of Cave’s recurring themes, snow and ice – “The stars have been torn down / The moon is locked away / and the land is locked in frozen snow.”

Opening track Get Ready For Love is the most energetic on the album, the raucous intro almost worth of The Birthday Party and the choir going mad in the background. Cannibal’s Hymn teams some lovely squelchy guitar from Mick Harvey with hollow drums, and builds to a fine bluesy climax and the undeniable truth “if you’re gonna dine with them cannibals / Sooner or later, darling, you’re gonna get eaten…”

But the light relief in Abattoir Blues comes from the irresistible Nature Boy, a real departure in terms of sound for Nick Cave & The Bad Seeds and a joyous one at that.

The Lyre Of Orpheus kicks off with the title track. You were expecting something in line with the myth perhaps – Orpheus playing his lyre so beautifully that animals, birds, even rocks and trees were spellbound…? Cave turns the myth on its head for one of the funniest songs he’s ever written: a straight blues number with twangy, discordant guitars and the blackest of black lyrics. “Look what I’ve made, cried Orpheus / and he plucked a gentle note / Eurydice’s eyes popped from their sockets / and her tongue burst through her throat…” And that’s just the start of the fun. Wait ’til Eurydice tells him where to stick it.

Breathless is a charming calypso and Carry Me is a stonking Gospel song guaranteed to raise the roof live. Babe You Turn Me on has some of the darkness of Abattoir Blues but musically it’s much more upbeat. Easy Money and Spell are gravely beautiful songs with gently falling piano cadences reminiscent of No More Shall We Part – this is sadness rather than anger. The closing song takes us full circle to the darkness of the abattoir and all that’s wrong with the world, but O Children is a powerful anthem none the less, one of the best on the double album.

A return to form? Yes, with reservations – nothing on these albums shows the sheer musical inventiveness of earlier albums such as Let Love In, and there are only so many times you want to hear about snowy wastelands and madhouses. But there are plenty of great moments and for that we must be grateful.