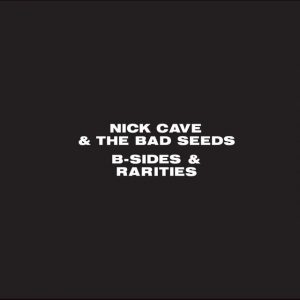 What a coming-of-age collection. Even the most ardent Nick Cave follower is going to find something new in this mammoth, three-disc, over three-hour, 56-track set. B-Sides & Rarities is exactly what it says, and well may Nick Cave say it’s his favourite Nick Cave & The Bad Seeds album, because most artists would kill to have material of this quality lying around as “B-sides, outtakes or extra recordings”, as Mick Harvey puts it.

OK, the band has been together for 21 years, which helps. And the range of the members’ artistic adventures is varied, including providing film music for Wim Wenders and covering some perhaps surprising artists – the classic Roy Orbison song Running Scared really shouldn’t work but is an absolute treat, and I much prefer this version of Helpless to the Neil Young original.

From the vast choice of tracks and styles on offer here everyone will have their own favourites, depending to a great extent on whether they favour the earlier, wilder Bad Seeds, with echoes of The Birthday Party, the black humour of the Murder Ballads era, or the contemplative beauty of The Boatman’s Call and No More Shall We Part.

But it’s all fascinating. Acoustic versions of Deanna, the Mercy Seat and City Of Refuge are a revelation, though I still can’t cope with Jack The Ripper.

The most extraordinary track is perhaps the previously unreleased version of Where The Wild Roses Grow featuring Blixa Bargeld singing the part destined for Kylie Minogue, as a guide vocal. It is difficult to think of two people more different, in every respect, than Blixa Bargeld – one of the founder members of The Bad Seeds but also of German industrial band Einstürzende Neubauten, with a sepulchral, gravel voice – and the winsome Ms Minogue. And yet the track is stunning.

Another treat is the instrumental Time Jesum Transeuntum Et Non Riverentum, originally released as a “hidden track” on the TV soundtrack CD Songs in the Key of X: Music From And Inspired By The X-Files (1996). Cassiel’s Song – from the soundtrack of the Wim Wenders film Faraway, So Close! – is also lovely.

Other previously unreleased rarities include There’s No Night Out At The Jail, a cover of an Australian country music classic, and a total reworking of Red Right Hand featuring Barry Adamson, an orchestra and a set of four new verses. Odd when you’re used to the wonderfully harsh original, but all the more creepy for the smooth and sophisticated production.

Sheep May Safely Graze is a lyrical, wonderfully melodic outtake from The Boatman’s Call, and is just one of many tracks in which Cave’s voice is at its best – deep, rich and relaxed. Opium Tea – from the same session – shows the Bad Seeds in more playful mood, with a strong calypso feel.

The B-sides, as far as I can tell, are the complete set: the earliest is The Moon In The Gutter, released in 1984 with In The Ghetto. The Girl At The Bottom Of My Glass (great title) is from 1988, with the 12″ single of Deanna. The Train Song, Blue Bird, Black Betty, The Six Strings That Drew Blood, Sail Away, The Willow Garden – all minor classics in their own right, and reflecting the nature of the A-sides they accompanied.

Little Empty Boat, Come Into My Sleep, Grief Came Riding… the list goes on and it’s extraordinary that there really isn’t a dud song among them. Even more amazing, every song has its own very distinct life and inspiration.

While there’s no doubt that Nick Cave is a master song-writer, credit must also go to the Bad Seeds who bring so many individual talents (not to mention instruments) to the party. Mick Harvey has been an irreplaceable constant since the beginning, but others – Barry Adamson, Blixa Bargeld, Thomas Wydler, Martyn Casey, Conway Savage, Jim Sclavunos, Warren Ellis and most recently James Johnston (Gallon Drunk) – all play an important part in creating this supremely impressive body of music.

All fans will buy this as a matter of course, but even if you aren’t yet a convert you will find this a brilliant introduction to the sometimes weird but always wonderful world of Nick Cave & The Bad Seeds. Which reminds me, you also get that highly unlikely duet, Nick Cave and Shane McGowan singing What A Wonderful World, followed by the magical Cave version of The Pogues‘ classic, Rainy Night In Soho. What more could you ask? Apart perhaps from the wildly funny reprise of O’Malley’s Bar… I won’t spoil it for you, though. Go buy.