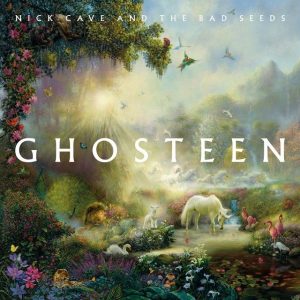 As anyone who has experienced grief knows, it comes in waves. That initial tsunami, seemingly all-consuming at the beginning, slowly ebbs away, but those waves keep lapping inshore. The process of understanding and living with grief is one we all go through, but it never gets any easier.

Nick Cave has been through a very public grieving process since the tragic death of his 15-year-old son Arthur in 2015. It’s a subject he’s discussed both in his weekly newsletter Red Hand Files, and earlier this year in his ‘in conversation’ gigs. If anything good can be said to come out of this horrific event, it’s that it has seemed to bring Cave, who has always had an intense relationship with his fans, even closer to them.

Ghosteen is the final part of a trilogy that began with Push The Sky Away and continued with 2016’s impossibly affecting Skeleton Tree. Most people presumed that the songs on the latter were about Arthur, but in actuality, those tracks were written before his death. So Ghosteen is the sound of Cave responding to his grief and trying to understand it. Like Skeleton Tree, it’s not an easy album to listen to, but it’s an extraordinary and compelling one.

It’s also a long listen – over an hour, with two tracks clocking in at over 10 minutes. Yet this is an album that needs to be sat down and listened to in its entirety, rather than dipping into random songs on shuffle. Like on the Bad Seeds’ previous two albums, these songs are built around Warren Ellis’ majestical synths, acting as a weightless, ghostly presence around Cave’s often heartbreaking delivery.

It’s a necessarily painful album, but also a comforting one. Spinning Song, which introduces the record, slowly unfurls over the story of Elvis Presley‘s Vegas comeback (a nod to an early Bad Seeds song, Tupelo), before the song’s devastating coda of “and I love you, and I love you… peace will come, a peace will come in time”. As opening tracks go, it has the power to completely stop you in your tracks.

There are various moments which can become almost overwhelmingly emotional – Cave’s delivery of a line like “sleep now, take as long as you need, ’cause I’m just waiting for you to return” on Waiting For You, or the beautiful title track’s assertion that “there’s nothing wrong with loving something you can’t hold in your hand”. Cave’s lyrics are as poetic as ever, with added emotional weight this time around: see the “spiral of children (who) climb up to the sun, waving goodbye to you and goodbye to me” on Sun Forest.

One of the most impressive aspects of Ghosteen is Cave and Ellis’ arrangements, which transform these often formless, meandering pieces into something truly beautiful: the choral voices slowly appearing in Bright Horses, or the synths and backing vocals around Cave on Ghosteen Speaks. It’s the latter which is one of the album’s most poignant moments, where Cave seems to be channelling the spirit of his son, reassuring his father that all is well in the afterlife (“I think my friends have gathered here for me… I am beside you… I think they’re singing to be free”). By the time the first disc closes with Leviathan, which sees Cave clinging to his wife to try to make sense of their trauma, it’s likely you’ll be in need of a long lie down to recover your emotions.

The second disc (Cave has called the eight songs on the first half of the record the ‘children’ and the three songs on the second half the ‘parents’) is two long songs, which are interlinked by a spoken word piece, Fireflies. As ever with Cave, there are no easy answers or conclusions given, but there’s a sense of coming to terms with the grief – as Hollywood puts it, “it’s a long way to find peace of mind, and I’m just waiting now for my time to come”.

Some may think it pretentious to refer to an album as a work of art, but that’s exactly what Cave has created with Ghosteen – one that’s been conceived from the most terrible of circumstances. Yes, it can be painful, but there’s a beautiful catharsis contained within Ghosteen that makes it one of the most essential records of recent times – a lifejacket for anyone surfing that dreadful wave of grief.