Nick Cave & The Bad Seeds – No More Shall We Part 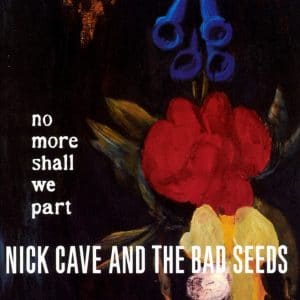 Nick Cave is a strange and fascinating person. Some of his early work is murderously harsh, yet The Boatman’s Call (1997) is perhaps one of the most beautifully lyrical albums of recent years.

Many long-term followers, sadly, were unimpressed by this turn towards the love song that could actually be recognised as such. After a hiatus of four years (during which Cave married and became the father of twins), No More Shall We Part may please both camps.

The humour is still inky, madness abounds and many of the lyrics are surreal (“And my piano crouched in the corner of the room with all its teeth bared…”). The music, however, is sublime: mostly simple arrangements for piano and strings that act as a perfect backdrop for the sepulchral voice. The Bad Seeds – Mick Harvey, Blixa Bargeld, Thomas Wydler, Martyn Casey, Conway Savage, Jim Sclavunos and Warren Ellis – as usual allow the song to take precedence, and backing vocals by Anna and Kate McGarrigle add an almost unworldly dimension to some of the tracks.

No More Shall We Part oscillates neurotically between the savage and the sentimental. The 12 tracks range from the elegantly melancholic As I Sat Sadly By Her Side (the first single from the album), through the disturbing Halleluja (“I’d given my nurse the weekend off…”) to the downright manic in Oh my Lord. Nick Cave’s voice, always interesting, switches from soft and infinitely seductive (Love Letter, Sweetheart Come, Gates to the Garden) to tearing rage (The Sorrowful Wife, Fifteen Feet of pure white Snow).

Whatever the mood, the lyrics are consistently fascinating. Nick Cave has been compared with Dylan, Van Morrison and Leonard Cohen as a songwriter. As his collected lyrics are published by Penguin Books (out 26 April), this album can only strengthen his claim to parity. One thing that sets him apart, however, is the wicked sense of humour, particularly evident in God is in the House, an unforgiving parody of the complacency of small town America. “Moral sneaks in the white house/ Computer geeks in the schoolhouse/ Drug freaks in the crack house/ We don’t have that stuff here/ We have a tiny little Force/ But we need them of course/ For the kittens in the trees…” Almost every song has a line that stops you in your tracks with its imagery – I particularly liked “as the steeple tore the stomach from a lonely little cloud…” (Darker with the Day).

The initial release comes as a limited edition double album including two extra tracks – the beautiful Grief came Riding and Bless his ever loving Heart – and video footage of the recording sessions. It’s a must for any Nick Cave fan and should convert many new ones – I know it’s early, but this could well be my album of the year. At the first hearing it’s interesting. At the second, fascinating. By the third, essential.