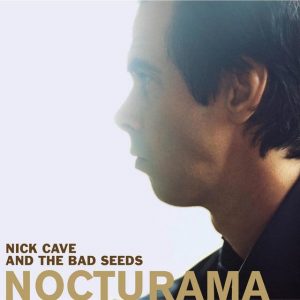 Die-hard Nick Cave fans have not been impressed by his transformation from, as one reporter has put it, “miscreant rocker into latterday lounge lizard”. It’s true that if you preferred the raucous energy of songs such as Deanna and the vicious black humour of Stagger Lee the last two albums – The Boatman Calls and No More Shall We Part – signalled a huge change, with their melancholic and beautiful love songs.

Nocturama takes this metamorphosis one step further. The first three tracks offer more gorgeous melodies and – whisper it – even an optimistic outlook on life. It’s a Wonderful Life is a lovely, uplifting song; He Wants You is one of the most romantic ballads Cave has ever written, sounding almost like Van Morrison from the glory days of Astral Weeks. Although Right Out Of Your Hand starts out with some downbeat lyrics – “Poor little girl / with your hand full of snow / poor little girl / had no way to know” – by the time we reach the chorus we know there’s going to be a happy ending.

Still in Love is in the mould of As I Sat Sadly By Her Side, with delicate piano like dripping water and the lugubrious violin of Warren Ellis providing a backdrop for Cave’s deep baritone, which seems particularly well oiled on this album. Is it my imagination, or just the use of the lyric “you might think I’m crazy”, or is he paying homage to Patsy Cline in this track, relating the end of an affair?

The eerie key changes in There Is A Town give it a lovely Portishead atmosphere very well suited to the many talents of the Bad Seeds – more in this vein would be very welcome. Rock Of Gibraltar is, frankly, dire – a mishmash of bad clichés: I just hope it was written tongue in cheek, though it’s often difficult to tell with Cave.

Bring it on, which will be the first single from Nocturama, is a terrific song with an unmistakable Bad Seeds bass line intro, and a great chorus featuring a duet with Chris Bailey of Australian punk-rockers the Saints. Could this be Cave’s first mainstream hit? (Leaving aside the duet with Kylie – after all, she probably played some part in that success…). That would really worry the fans.

So the big question is, has Nick Cave sold out to the Radio 2 brigade? Has a happy marriage and fatherhood finally killed the rage inside? The good news is, not quite…

Dead Man In My Bed finally gives Blixa Bargeld a chance to let rip in a rollicking song about a woman stuck with a useless partner. The true answer though comes in the last track, the 15-minute epic Babe I’m On Fire. The noise levels are set to raucous, the lyrics are both ridiculous and hilarious, and you just know that if you ever see him sing this live, there will have to be someone on stage holding a crib sheet a la Curse of Millhaven. The last verse says it all: “Warren says it, Blixa says it / the lighting guy and mixer says it / Mick says it, Marty says it / Everyone at the party says / Babe I’m on fire.”

Frankly it’s not a great song and I get pretty bored with it after five minutes, let alone 15, but if it keeps people happy that’s fine. Personally I love the new approach. It may be softer, but Nick Cave still writes some of the most interesting music around. That’s not to say I wouldn’t welcome new material with the fire of Red Right Hand or Papa Won’t Leave You, Henry, but they will come when the time is right – maybe when the kids turn into hellraisers themselves.