Nick Cave & The Bad Seeds – Push The Sky Away 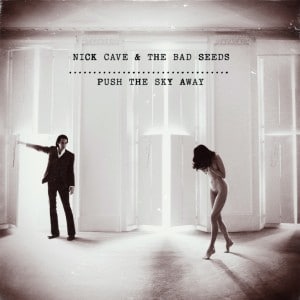 2013 marks Nick Cave & The Bad Seeds’ 30th anniversary, and their 15th album marks something of a new beginning for the Australian auteur. Push The Sky Away is the first Bad Seeds album not to feature Mick Harvey, who left the band in 2009.

For those used to the Bad Seeds’ guttural howls and ferocious guitars, that change will be easily heard on Push The Sky Away. This isn’t Cave as the fire and brimstone preacher figure of Abattoir Blues, the deranged narrator of serial killer adventures as heard on Murder Ballads, or the balls-out ageing rocker in Grinderman. In fact, this is Cave at his most restrained – not since The Boatman Calls have we heard him as reflective as we do here.

Whereas that album dripped with pure sadness though (written, as it was, in the midst of a relationship breakdown), Push The Sky Away has a dark, unsettling edge to it. And, being Cave, it’s also often very funny. There’s a song called Higgs Boson Blues, which features the lyric “Hannah Montana does the African savannah” – it’s debatable whether any other ‘serious’ songwriter would get away with it, but Cave does so majestically.

Harvey’s departure has allowed Warren Ellis to move more to the forefront – in fact, Cave has described this album as “the ghost baby in the incubator, and Warren’s loops are the its tiny trembling heartbeat”, and he’s right in that the drum loops lend the tracks on Push The Sky Away an almost menacing tone. On the first couple of listens, it may all seem a bit underwhelming, a bit too sombre for its own good. Yet, slowly but surely, the magisterial atmosphere soon gets under the skin.

We Know Who U R sets the tone from the off, a stripped-down backing of gentle organ and clanking percussion, with just Cave and a coterie of backing singers intoning, rather sinisterly, that “we know who you are, and we know where you live”. There’s also some lovely lyrical imagery at play, with talk of “the trees will stand like pleading hands”. Those lyrics have always been a high point of Cave’s work of course: and, although there’s nothing that quite matches the delirious insanity of Nature Boy, he doesn’t disappoint on Push The Sky Away.

Jubilee Street, for instance, is a gorgeously written tale about a wordly prostitute called Bee, a girl “with a history but no past”, and a punter with “love in my tummy and a tiny little pain, and a 10 ton catastrophe on a 60 pound chain”. Like the best of Cave’s songs, it could easily form the basis for a novel, and is easily one of the highpoints of the album. It even provides the inspiration for another song on the album, Finishing Jubilee Street, a rather meta tale of Cave falling into a deep, hallucinogenic dream about marrying a child bride after completing the aforementioned Jubilee Street. It’s a gripping and compelling narrative, if slightly odd.

Not as odd as Higgs Boson Blues, though, a sprawling, near eight minute masterpiece about a road trip to Geneva to see the Large Hadron Collider, featuring Robert Johnson, Lucifer (with “one hundred black babies running from his genocidal jaw”), a preacher, sobbing cleaning ladies, and, as previously mentioned, Miley Cyrus‘ most famous character performing the “African savannah”. You’ll struggle to comprehend what on earth he’s on about, but you won’t be able to stop listening.

There are some slight misfires, mind – We Real Cool never particularly recovers from its terrible title, while Mermaids contains the line “I was the match that would fire up her snatch” which is pretty much the dividing line where carnal lust becomes ever so slightly creepy. Also, long-term fans, and those who prefer Cave’s more raucous side, will certainly miss the more manic side that he’s so good at.

Yet, as he moves into the ‘elder statesman’ era of his career, this spectral, minimal atmosphere certainly suits that famous voice. The Bad Seeds, like any good band, are constantly evolving and growing. Push The Sky Away demonstrates that even in his 30th year, nobody delivers a lyric quite like Nick Cave.