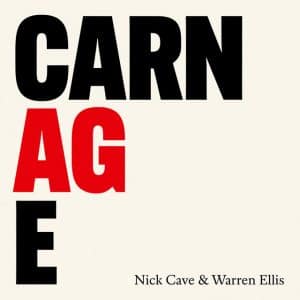 Once tempestuous and brutally apocalyptic, the sound world explored by Nick Cave & The Bad Seeds has been drifting further into more textural and abstract explorations. In the absence of Blixa Bargeld and Mick Harvey, multi-instrumentalist Warren Ellis has established his core presence in the group, responsible for both its moments of overwhelming beauty and its still occasionally more dissonant and frightening architecture. Cave and Ellis have also worked productively as a duo on film soundtrack work for a number of years, but Carnage is their first album as a duo outside that world. It is therefore perhaps unsurprising that it has a vivid, cinematic quality to accompany its stark poetry.

Carnage is also a consciously bifurcated work, its second half a little more familiar from the experience of being immersed in the environments of Skeleton Key and Ghosteen. Songs like Albuquerque and Lavender Fields are overwhelmingly beautiful in a manner characteristic of Cave’s more recent work, while Shattered Ground captures something more elevated and mysterious (“there’s a madness in her and a madness in me, and together it forms some kind of sanity”). Rhythm is largely jettisoned in favour of sustained, lingering pad sounds.

If Ghosteen’s atmospherics perhaps became a little oppressive over the course of a double album, the more turbulent first half of Carnage provides contrast with some unexpected thrills and spills. The opening Hand Of God sets out its stall as if it intends to be a stately piano ballad, before unexpectedly transforming into a pulsating quasi-techno piece driven by ominous strings. On the one hand, this feels strikingly new, but there is also something of From Her To Eternity and The Carny in its insistence.

Elsewhere in the first half of the album, Cave and Ellis prove more interested in exploring rhythm. Old Time is underpinned by a lightly crack-a-lacking drum part and rumbling synth bass line, which serve to tether its more eerie and unsettling interjections. Over and above all this, Cave himself resembles a preacher or a prophet, and religious imagery appears liberally in the album’s lyrics. There are a number of references to the “kingdom in the sky”.

The focal point of the album, on which this coming kingdom is most clearly promised, is the discombobulating White Elephant. This dense and troubling song muses on the apocalyptic undertones of recent events, addressing the driving forces of both white supremacy and anti-racist, anti-imperial protest. The music is a curious, mechanical funk, not entirely distant from Bargeld’s work in Einstürzende Neubauten. For the most part, this is Cave in doom poet mode. However, the song concludes not only by promising the coming kingdom in the sky, but doing so in the form of a transcendent terrace anthem singalong somewhere between the work of Elbow and The Flaming Lips. Whereas Cave songs usually establish a clear sonic and thematic identity, this one is built on some strange and uncharacteristic juxtapositions.

The album’s title track sits balanced on a precipice between its two sound worlds, dominated by a powerful and haunting melody but anchored by a light drum machine pulse. Like many of Cave’s recent songs, it’s deeply poignant (“I always seem to be saying goodbye”), capturing something of the inescapable drive to create (“this song is like a rain cloud that keeps circling overhead”). With Carnage, Cave and Ellis have successfully balanced introspection and self reflection with the tumult and confusion of the wider world. It’s a hugely powerful statement.