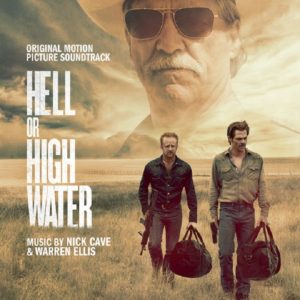 And so Nick Cave Month, or as it used to be called September 2016, rolls on. We’ve already had a brand new album from Cave and The Bad Seeds, entitled Skeleton Tree, and an accompanying film, One More Time With Feeling. Both the album and film deal with the immediate aftermath of the death of Cave’s 15 year son Arthur, who fell from a cliff in Brighton last year.

As you’d expect, both the film and album are extraordinary but very difficult to experience – the grief is almost all-encompassing, so much so that at times the viewer or listener starts to feel almost like a voyeur. On that basis, the second Cave album to be released this month, one of his semi-regular film soundtrack collaborations with fellow Bad Seed Warren Ellis, is somewhat lighter stuff. Well, kind of.

Hell Or High Water is the latest in the long line of film soundtracks by Cave and Ellis, and is very much in the same vein as the pair’s score for The Road or The Proposition – slow and contemplative as Cave’s piano dances around Ellis’ string arrangements. The film itself concerns a plan by two Texan brothers to stage a series of heists in order to save their family farm from foreclosure, but the soundtrack is light years away from the self-consciously hip, bubbly music which David Arnold composed for Ocean’s Eleven. As you’d expect from the creators, this makes heists sound dry, foreboding and almost menacing.

In between Cave and Ellis’ original score are a handful of country rock songs by both familiar names – Waylon Jennings, Townes Van Zandt – and slightly less familiar ones such as Chris Stapleton and Ray Wylie Hubbard. So Scott H Biram lends his impressively throaty vocal to the infectiously upbeat Blood Sweat And Murder, while the young Canadian country singer Colter Wall (just 21, but with a voice that recalls vintage Johnny Cash) shows himself to be a name to look out on the brooding Sleeping On The Blacktop.

It’ll be the instrumental sections that Bad Seeds fans will be looking out for though, and they won’t be disappointed. Mama’s Room is gorgeous, with Cave’s piano blending perfectly with Ellis’ violin chords, while Robbery successfully builds up an almost overwhelming tension. Some of the tracks are a bit too brief to make much of an impression – Casino, for example, seems to be over before it’s started – yet each instrumental passage leaves a sense of reflection and sadness. Like most soundtracks, it’s probably enhanced by seeing the film concerned, but it also works well as a standalone piece.

Having said all that, Hell Or High Water will probably be an acquired taste for most people – as beautiful as it undoubtedly can be, the whole experience can be pretty dour, and sometimes the juxtaposition of the more traditional country rock songs with Cave and Ellis’ brooding score can be grating. This obviously doesn’t have the emotional devastation that Skeleton Tree possesses in spades, but it makes for a calming starter before the storm of the main course.