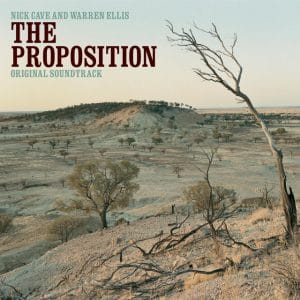 When you hear that Nick Cave and Warren Ellis have written the soundtrack for an Australian outback movie reputed to be pretty violent, the expectation has to be for at least some fire and brimstone. There’s enough in Cave’s earlier work to keep hordes of outlaws busy.

The gentleness of the soundtrack to The Proposition – which although violent is also reckoned to be ‘The film Ned Kelly should have been’ – is therefore surprising, but very welcome to those of us who prize Cave’s more contemplative work, best demonstrated in The Boatman Calls and No More Shall We Part.

This soundtrack is far from a series of love songs, however. The sound is bleak, sparse, suggestive of thousands of acres of nothing – which of course is what most of Australia consists of, as you discover when you spend hours flying over it. The brief opening track Happy Land sets the scene with plaintiff strings from Warren Ellis (one assumes, though the performers aren’t credited on the sleeve), bowed and plucked, and something like a mouth organ – music that men would produce miles from civilisation.

The first exposition of the film’s theme builds on this sound, adding gently pulsing synths, even gentler piano chords and the simplest of central motifs, a falling three-note sequence for piano and voice. The result is quietly mesmeric and representative of the whole score, unusually cohesive for a film soundtrack and therefore one that stands in its own right, despite the chopped-off feel to some of the tracks.

There are a few excursions into a percussion-led, nervous, twitchy style, notably Road To Banyon. Vocals are treated instrumentally: Down To The Valley is the first track to feature anything resembling a song, with Cave overlaying a restrained, almost muttered lyric to eerie but good effect. Many tracks feature a tense, rumbling background continuum described in the notes as abstract avant-folk drones – not a bad way of putting it, and its links with the sound of the didgeridoo certainly place the listener firmly in the Australian outback.

Martha’s Dream is a fascinating track, the meaning of which presumably becomes clear when one sees the film – the story and the music are said to be closely entwined. This track contains some of the most beautiful music, with almost minimalist, rhythmic strings contrasting with strange flutterings as if a flock of ravens has just taken to the air.

Queenie’s Suite is another highlight. Even though less than three minutes altogether, three distinct but linked sections delight. Piano notes fall like water drops against a background of atonal violin, then morph into something altogether more melodic; finally we are treated to possibly the most upbeat section in which the violin is allowed to swirl around percussion.

Nick Cave shows his normal persona as lyricist and singer in The Rider, a deceptively simple song that develops with the film. Part III is the only track one could really call a song in the accepted sense, and Part II provides a glimpse of the gothic horrors one might have expected – scratching violin and driving rhythms for a violent scene, albeit short-lived. That leads straight back to the contemplative theme however, and we’re back with those gentle, isolated, desolate sounds.

It’s always a test of a soundtrack to hear it without its accompanying images, and this one does stand up to that scrutiny. It’s not going to replace other Nick Cave / Bad Seeds albums in most personal playlists but it is a fascinating and haunting listen, and intrigues enough to make one want to see the film.