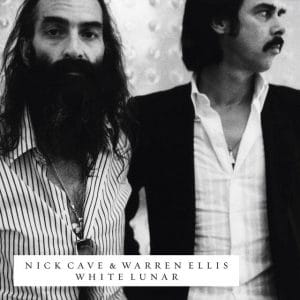 In this summer’s ubiquity stakes both The Beatles and Nick Cave appear to have become omnipresent. The current wave of Cavemania follows in the wake of his sophomore novel The Death Of Bunny Munro, though we’re eagerly awaiting someone to develop Rock Band: The Bad Seeds too.

White Lunar is a cannily timed compilation of sorts, putting together the highlights of Cave and fellow Bad Seed and Dirty Three lynchpin Warren Ellis’ soundtrack work with some instrumental rarities.

Cave and Ellis have been working with each other for over 15 years, spanning work on the Grinderman project as well as these soundtracks and the ongoing success of The Bad Seeds. Their foray into scores is relatively recent, starting with their work on John Hillcoat’s Australian western/revenge drama The Proposition, for which Cave also wrote the screenplay. The highlights from this film capture the haunting mood of the story together with an essence of traditional folk.

Afterwards they were commissioned to work on Andrew Dominick’s underrated western The Assassination Of Jesse James By The Coward Robert Ford, the score for which has been an undeniable highlight in their careers. Simple yet moving, it mirrors Brad Pitt’s slow march towards the inevitable demise promised by the title.

These films take up a third of White Lunar’s gargantuan double disc running time. The rest is made up from rarities and sneak previews of work to come. Disc 1 is completed with some music from Hillcoat’s next film, an eagerly awaited adaptation of Cormac McCarthy’s Pulitzer winner The Road. It feels a natural extension of the work done on Jesse James and is no less fascinating.

The second disc is of more interest to long time followers. Included here is work done on the documentaries The English Surgeon and The Girls Of Phnom Pehn as well as some tracks dug out for the Cave/Ellis archive. Here the simplistic and effective themes continue, the music continuing to be pregnant with poignancy.

If you’ve never heard any of these pieces before than be warned – there is none of the No Pussy Blues swagger and hardly any vocals. Musically it’s more akin to a minimised version of the Bad Seeds’ most tender album so far, The Boatman’s Call.

A compilation of soundtrack pieces shouldn’t work on paper, but these evocative tracks stand up well after being separated from their original context. Bad Seeds fans yet to dip into this rich pool of material should lap up White Lunar. This massive compilation might arguably be too long for some, but it’s testament to the value of their music.