by John Murphy
published: 12 May 2014 in Album Reviews
Tweet 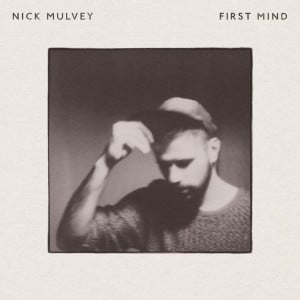 Nick Mulvey‘s debut solo album may not be quite what you expect. It’s very likely, however, that you didn’t quite know what to expect – after all, Mulvey made his name in the critically adored, Mercury nominated jazz group Portico Quartet playing the Hang, a Swiss percussive instrument. And, while there’s undoubtedly an album to made featuring free-form instrumentals and intense drum solos, this thankfully is not that album.

Instead, Mulvey has taken a surprisingly commercial left-turn and joined the ranks of earnest, bearded troubadours. There’s not a drum solo in sight, and people who run away in fear whenever the word ‘jazz’ is even uttered have nothing to fear. First Mind is an album aimed squarely at the rather overcrowded marketplace featuring the likes of Damien Rice, Ben Howard and, most obviously throughout this record, Jose Gonzalez.

It’s the sort of genre where you have to be either refreshingly different or incredibly good to be able to stand out from the crowd. So, it’s a good thing that while Mulvey’s debut may not be startingly original, it is remarkably accomplished. This is a hypnotic, warm and often beautiful album that, on occasion, fairly takes the breath away.

The title track makes for a mesmerising opening to the album, with Mulvey’s expert finger-picking guitar meshing beautifully with some intricate hand-clapping. What’s most surprising, given Mulvey’s background in instrumental music, is the quality of his vocals – he has a rich, warm and expressive voice which is suited down to the ground with the material gathered on First Mind. That material is quiet, still, beautifully crafted and expertly played: some people may find themselves lulled to sleep (this certainly isn’t a party album) but the rest will simply have their breath taken away.

Anyone familiar with Mulvey’s smattering of EPs will be familiar with some of the tracks, but songs such as the excellent Juramidam have been completely re-recorded, transforming a once austere number into a driving, more urgent track. Cucurucu begins a hushed, spellbinding reworking of DH Lawrence’s Piano, told with a genuine poetic flourish (“my heart beats with a ceaseless yearning to belong”) as, slowly horns and percussion are added to the mix – for even though he may have hung up his Hang drum, he retains an expert percussionist. It’s the sort of song you can listen to over and over again, and still hear fresh elements every time.

First Mind is an album with plenty of surprises. Nitrous is basically a cover version of Olive‘s mid-’90s dance classic You’re Not Alone, reborn as a stirring folk ballad and bookended with a mysterious tale of an old man selling laughing gas. I Don’t Want To Go Home, by contrast, is a direct and personal straight-ahead acoustic ballad and the intricate finger-picking on The Trellis demonstrates Mulvey’s Cuban influences (he spent time as a teenager studying in Havana).

At 12 songs long, there’s not a duff track in sight, more than justifying the length of time that Mulvey’s spent on his debut (after all, it was just over three years ago that he left Portico Quartet). That perfectionism has paid dividends, for First Mind is an album that can be played time and time again without ever sounding tired or laboured, and it wouldn’t be a huge shock to see it on many people’s end of year lists come December. The second stage in Nick Mulvey’s career looks set to eclipse his first.