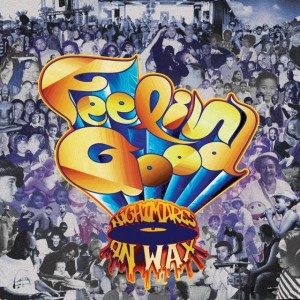 Although the trip-hop genre of the mid-1990s was perceived as predominantly Bristol-based due to the high profile of Massive Attack, Tricky and Portishead, similar acts were also emerging elsewhere in the UK during the same period. Leeds resident George Evelyn, better known as Nightmares On Wax, was one such musician and in its own way, his 1995 album Smokers Delight, with its addictive, sun dappled blend of electro, soul and hip hop, was every bit as representative of its time as Dummy or Maxinquaye.

Evelyn’s output over the years since has been fitful, with 1999’s Carboot Soul continuing where Smokers Delight left off before a series of underwhelming records during the following decade left little impression other than with a devoted handful of long term acolytes.

It’s a pleasant surprise then to listen to Feelin’ Good, the first Nightmares On Wax album proper in five years, and to be greeted by their most coherent, enjoyable music since the peak years at the end of the last century. Recorded with the help of European musicians ranging from Jazzanova arranger Stefan Studzinsky and London soul singer Mozez to German jazz percussionist Wolfgang Haffner, it has all the ingredients we have come to expect from Nightmares On Wax; simultaneously mellow, rhythmic and playful, like all the band’s best work.

Feelin’ Good kicks off with So We Are, which boasts a smooth, languorous groove and dreamy brass and strings that are quintessentially Evelyn, conjuring up blissful images of its creator sitting watching the waves lap on the shore at his Ibiza home. Be, I Do opens with a child singing to itself before breaking into an irresistible shuffling beat that it’s impossible not to tap your toe to, while Master Plan is a deliciously hypnotic, slow-burning ballad that recalls the cream of the chillout scene of the early 2000s. With these three tracks alone, Nightmares On Wax prove they are back at the top of their game.

The quality control does drop slightly with the somewhat shapeless jazzy noodling of Luna 2, and Now Is The Time’s Jamaican dub and dancehall vibes arguably up the tempo of proceedings a little too much. Worries of a mid-album dip are soon dispelled though, as Give Thx is quite possibly the standout track on the entire record. Featuring Mozez in fine honey-voiced form, it sounds like the kind of song Marvin Gaye might have come up with had he relocated to the Balearics at some point during his heyday.

Feelin’ Good ends on a high with two classic Nightmares On Wax tracks. There 4u, with its crackling reggae undercurrent and alternating whispered male/female voices, is the kind of graceful comedown tune Evelyn has always specialised in delivering. Om Sweet H(Om)e is even more beatific, all softly shimmering chords and peaceful, hazy ambience, slowly coming to a halt half way through before elegantly stirring back into life again. Music has moved on since Nightmares On Wax first emerged, yet there is little here that suggests the sounds of 2013 have any influence on Evelyn’s vision. No matter – while it may not be 1995 any more, few listening will care when the nostalgia is this expertly crafted.