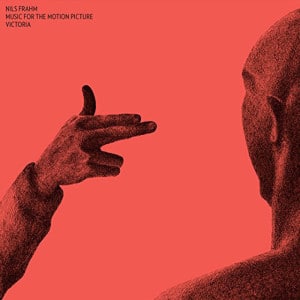 There’s an awful lot of buzz surrounding the upcoming film Victoria, a German thriller shot in one continuous take that tells the story of a young woman who meets three men in a techno club, and ends up committing a bank robbery with them. By the sounds of that synopsis, you’d expect the soundtrack to be filled with hard, thumping, urgent electro – something reminiscent of the cult ’90s film Run Lola Run, perhaps.

Instead, Victoria is scored by Nils Frahm in what is his first foray into film soundtracking. It’s surprising to learn that Frahm has never scored a film before – his previous work seems custom made for cinema: the sort of music that has reviewers scrambling for words like ‘ethereal’ and ‘atmospheric’. Yet the Victoria soundtrack fits neatly into the Frahm canon: instead of the pulsating electronica that you may be expecting from a Euro-thriller, this is Frahm at his saddest, contemplative best.

He does throw a bit of a curveball right out of the gate though with the opening Burn With Me, remixed by DJ Koze to conjure up suitably sweaty images of a German nightclub – it’s clattering, hard-edged and, when the distorted vocals begin to rise above the cacophony, all rather ominous. As soon as we leave that club and go up onto Our Own Roof (Victoria is one of those soundtracks where the track titles pretty much give the film’s plot away), we’re into a more familiar version of Frahm.

Our Own Roof is blissfully melancholic, making great use of long-term Frahm collaborator Anne Muller on cello. There’s something reminiscent about Angelo Badalamenti‘s classic score for Twin Peaks, especially in the contrast between the gorgeous swell of melody and the distant, portentous rumble of noise that always seems to threaten to bubble beneath the surface. Frahm’s trademark piano is to the fore in most tracks, especially on the delicate Them or the fragile hush of The Shooting.

As this is a soundtrack album, there are a few moments that would only really work in conjunction with the film – so the humming drone of In The Parking Garage or the quiet contemplation of A Stolen Car are almost too minimal at times: nice to drift away to, but only really existing to build up the film’s narrative. On the other side of the spectrum is the slowly building epic of the album’s seven-minute centrepiece The Bank, in which Frahm and Muller, together with violist Viktor Orri Árnason and ambient artist Erik K Skodvin slowly and hypnotically dance around each other to create something achingly beautiful.

It makes for a good entry point for anyone who hasn’t heard any Nils Frahm before, and is also an extra treat for any long-term fans desperate for some new material (Victoria is actually his second album of the year, following up April’s free release Solo). It remains to be seen whether Hollywood directors will call on Frahm to soundtrack their next opus, but going by Victoria it would be their loss if they didn’t.