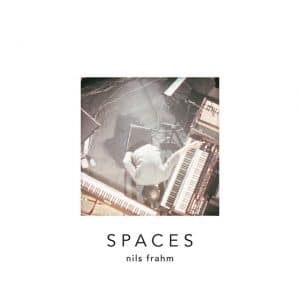 Nils Frahm‘s name pops up for multiple reasons these days. As a solo artist, the German composer (who is essentially three degrees of separation from Tchaikovsky, having studied with a student of Tchaikovsky’s last scholar) is the mind behind albums like 2009’s The Bells and 2011’s brilliant and beautiful Felt, the latter an album recorded inside a piano. The 31-year-old also produced of Hero Brother, an album released this year by Arcade Fire violinist Sarah Neufeld that was recorded in an abandoned geodesic dome and an underground parking garage in Berlin.

Having explored unconventional recording methods, Frahm now looks to patch things up with the comparatively traditional Spaces, comprised of two years of live field recordings featuring alternative versions of old and new material which works as a collage of sorts.

While the music on Spaces is Frahm’s most diverse yet, not only stylistically but having been recorded on reel-to-reel tape and cassette tape in many different venues across the world, Frahm bends the recordings into a cohesive artistic statement that manages to help him stray from the “minimalist” tag. The first track, the surprisingly forceful and almost Forest Swords-esque An Aborted Beginning, ends with a series of pity claps, which is the first reminder that Spaces, despite sounding like it’s recorded in a studio, is actually an immaculate live album.

The album shows off what it has to offer on track two with the rich, restrained Says, a track that uses its full eight minutes to slowly swell into something astonishing while still maintaining its delicacy. Minimal strikes of the piano intersperse themselves among sparkly Juno synthesizer blips to create a mood, aura, and atmosphere that manages to stay interesting even when many of its musical elements repeat. On Says and in general, Frahm doesn’t just play with volume and reverb, but with the listener, too: he defies the perceived limitations his clean music suggests.

Moreover, another “minimalist composer” misconception Frahm defies on Spaces is that he’s a serious, or rather humorless artist (as anyone who’s seen him live will already know). From the titles of songs like An Aborted Beginning, Improvisation For Coughs And A Cell Phone, and especially For–Peter–Toilet Brushes–More, it’s clear that Frahm wants you to recognize that Spaces is a not only a funny and playful album, but an imperfect live album. As an artist whose music often sounds seamless, the clearly John Cage-inspired Frahm is quick to point out his own imperfections and grounds his music in the world of a performer and an audience. Specifically, the stunningly beautiful Improvisation For Coughs And A Cell Phone features only piano, but taking the title into account shows that Frahm is purely interested in recording reality, not recapturing some vague or abstract idyllic sense of what classical music used to be.

Overall, from the faster, hectic shorter tracks like the less-than-four-minute Hammers, which shows off Frahm’s sheer piano-playing skill, to the drawn-out tracks like Says or the near-17-minute For–Peter–Toilet Brushes–More, Spaces proves Frahm to be a master puppeteer of his own keys. Frahm’s ability to conjure emotions and manually fill the spaces between the own minimal piano chords he creates with something beyond silence shows that his dextrous fingers are up to any challenge, whether in the studio, live, or a mix of the two. Spaces demonstrates a prodigious, world-class talent that shines through regardless of format or circumstance.