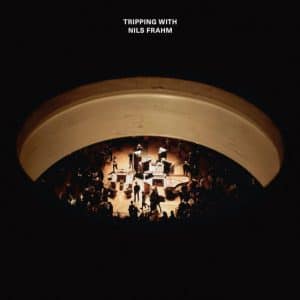 Multi-talented German pianist, composer and producer Nils Frahm isn’t just one of the most acclaimed musicians at work in any genre right now; he also has one of the most prolific outputs. Since 2015 alone, he’s been involved in no less than 15 different releases, ranging from solo studio projects and film soundtracks to collaborations with kindred spirits such as Ólafur Arnalds and a contribution to the long-running artist-curated compilation series Late Night Tales.

Tripping With Nils Frahm, the Hamburg native’s latest offering, is a collection of recordings taken from four performances he gave at Berlin’s Funkhaus in December 2018 as part of a lengthy world tour of his highly successful 2018 studio album All Melody. Frahm played more than 180 sold-out performances in total, including the Sydney Opera House, LA’s Disney Hall, the Barbican in London, Hamburg’s Elbphilharmonie, and several big festival stages around the globe. Yet the Funkhaus, known for its vintage grandeur and outstanding acoustics, and also home to the studio where All Melody was recorded, arguably captured Frahm’s towering live sound better than anywhere else. Frahm’s friend, the film director Benoit Toulemonde, recorded the concerts on film using only handheld cameras – the results of which are released on the same day, and with the same title, as the album. It is available to stream on curated online cinema service MUBI.

The most obvious reference point for Tripping With Nils Frahm is its creator’s spectacularly good earlier live album, 2013’s Spaces, which for many fans remains his most impressive achievement yet. Tripping.. doesn’t quite scale the rarefied heights of its predecessor, but it’s still an utterly compelling example of Frahm’s combination of technical virtuosity and emotional intensity.

Featuring eight tracks from All Melody and its (arguably even better) outtakes companion All Encores, Tripping… is a little mellower and quieter than Spaces overall, but also more consistent in tone, perhaps reflecting the smaller number of performances featured (Spaces sprawled over two years) and the more focused source material. These are subtle reimaginings rather than radical overhauls, but thanks to Frahm’s endless inventiveness and dexterity, everything feels fresh and interesting.

Highlights include All Melody standout Sunson, which blends ripples of pipe organ and pulsating electronica with dazzling panache; the All Melody title track, which while perhaps just a little over-long at 14 minutes plus, does build to an epic, soaring crescendo which would clearly be fantastic in a live venue; and the delicate piano pieces My Friend The Forest and The Dane, which in their unadorned states allow Frahm to show just what a talented classical pianist he is. The only slightly disappointing track is Fundamental Values which, spun out to almost four times its studio length, fails to sustain its momentum in its expanded form.

Boasting a formidable array of on stage equipment including grand and upright pianos, harmonium, mellotron, Fender Rhodes and Moog synthesiser, the sonic tapestry Frahm weaves is dauntingly intricate and accomplished. While being there in person would doubtless be even more memorable, Tripping with Nils Frahm from the comfort of your sofa is still an experience well worth having.