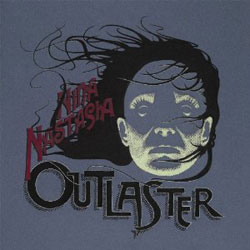 Since Nina Nastasia came to our attention in 2000 with John Peel’s championing of debut album Dogs, she has carved a career as a minimalist recording artist. Her songs rarely consist of more than four chords and her single-track vocals are never fussy or precious, but the simplicity acts as the perfect foil for her recounting of the darkest corners of human day-to-day life. 2007 saw her collaborate with Jim White on You Follow Me, adding skittish drums to effect a macabre claustrophobia. So with its full orchestration, Outlaster represents a departure for Nastasia.

But, as with all of her previous albums, Outlaster was recorded, engineered and mixed by Steve Albini. Cry Cry Baby kicks the album off in very familiar style, although as the track progresses Nastasia’s guitar and restrained but emotive vocal are joined by Jay Bellerose’s drums, percussion and an ever growing string section.

Most of the album is very familiar Nastasia territory. The chanson-noir of This Familiar Way is probably the artist’s first tango but makes for a standout moment, Nastasia’s droll Piaf tones imbuing the line: “And with each tear another stitch, there’s always something new to fix, until the raging flames burn it all to bits, through the wreckage through the fall, will I meet you this familiar way?”

This Familiar Way’s plaintive violin, and the stunning orchestration of What’s Out There? show Nastasia adding a new element, with more intricate use of strings than ever before. And the title track, which closes the album, is a sea shanty of breathtaking beauty. Subtle woodwind, horns and bells and dramatic but distant drums conjure a darkly stormy backdrop to Nastasia’s impressive folk vocal.

While the album is not a huge departure for Nastasia, and many of the themes and motifs will be familiar to long-term fans, Outlaster is impressive in artistry and accomplishment. The orchestration adds a new element to Nastasia’s canon, and her incorporation of different styles provides interest for those who have followed her over the past decade.