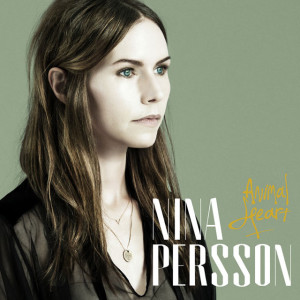 It’s been a long wait but after nearly five years, Nina Persson returns. With The Cardigans on hiatus and her last solo project A Camp apparently shelved, it’s time for Persson to step into the spotlight alone –  almost. Whilst A Camp was essentially a solo venture, both albums were heavily influenced by her guests.

Sparklehorse’s Mark Linkous contributed songs to the first album, whilst the likes of The Smashing Pumpkins‘ James Iha, Joan As Police Woman and Persson’s husband Nathan Larson (of Shudder To Think) undoubtedly added flavour to Colonia.

Larson lends a hand here too, along with Eric D Johnson (The Shins/Fruitbats), but with Persson stating “the most difficult and maybe also the best thing about going solo is probably all the decisions you make alone”, Animal Heart is perhaps the closest she’s going to get to a de facto solo album.

Initially the signs are promising, as the album opens with the recent single and title track. It’s a little lightweight and reaches back to ’80s synth pop for its basis, but there’s no denying it is an elegant and persuasive tune. As per usual, Persson entrances with the first line and is in control for the rest of the song. The lyrical refrain of “come be my man, baby come to me” might as well have been sung by a siren; and it’s very effective.

Burning Bridges For Fuel immediately shifts focus from away from the dancefloor and turns inwards for an introspective piano led ballad. It may be a spiritual cousin of The Pretenders‘ Stop Your Sobbing, but it contains enough personality and passion to stand on its own two feet. It is arguably the finest moment on the album, with Persson sounding damaged, breathy and impassioned. As she asserts “moving into a cabin with a gun is not the right thing to do” with a slightly cracked delivery, it is hard not to agree.

From here on, things get a little bland. It’s not Persson’s fault particularly, as her vocals are, as usual, quite wonderful, but occasionally the arrangements let her down. Dreaming Of Houses for example packs a punch at the chorus, but the verses meander terribly. Clip Your Wings is not unlike Fruit Bats own So Long, but lacks the lush arrangement, replacing it with a tinpot drum machine and a vocal line that at times feels a little too forced. Jungle is a little too laid back; when Persson states that its getting “kinda hot and hard in the jungle” the music doesn’t reflect it. If anything, it sounds a little depressing in the jungle. Closing the album is This Is Heavy Metal which isn’t heavy metal but actually a sultry jazz piano and vocal that explores different territory but does little to inspire.

That said, this isn’t a bad album. Not by a long chalk. It’s a little safe in places certainly, but there are moments of genius to be found. Food For The Beast for example finds redemption and epiphanies in a hard night clubbing (face down on the floor of the discotheque, I saw the poetry). It’s a song written for Persson’s strengths, playing on her apparent vulnerability and then launching into wonky but driven and self assured choruses. Forgot To Tell You is in essence a Fruitbats tune, as such it’s a quirky acoustic ballad filled with deft touches.

Silver Like The Moon meanwhile is a beautiful and brooding love song that shimmers like the surface of a pond at midnight. It is perfectly arranged, with delicate chimes, strings and Persson’s wonderful vocal combining to create a song of dainty elegance. It provides evidence the Persson is capable of some breathtaking moments. And indeed there are a few such moments on Animal Heart, if not as many as might have been hoped for.