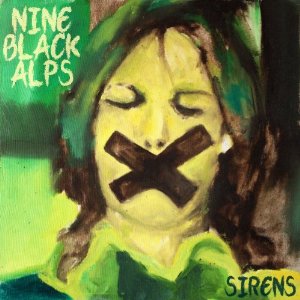 Following the success of Locked Out From The Inside, Nine Black Alps looked like they were back in the running for the kudos they attracted with their debut album Everything Is. As bad luck would have it, following numerous contract altercations and effervescent internal issues, the band went into limbo. Recently speaking about new album Sirens, Nine Black Alps frontman Sam Forrest had the following to say: “It’s the first thing we’ve released since 2009, which doesn’t seem too long ago but I guess it is, don’t really know what we’ve been doing for the past three years… I got sick of people asking me if the band had split up so I thought we should record some songs and here it is. I hope you like it.”

So what is there to expect from Sirens? It certainly paints the picture Forrest described. Here is a band who have ditched the notion of pressure and rush jobs to focus on producing music they clearly enjoy whilst encompassing that familiar Nine Black Alps sound, regardless of the new line-up (guitarist David Jones and former The Witches bassist Karl Astbury). Sirens could almost be deemed more of a relapse than a maturation, but that’s not to say it doesn’t manage to eschew the vapid or the conventional. Tracks such as Hand Me Down and Don’t Forget To Breathe instantly lay the classic Nine Black Alps joker card on the table. The only qualm here is the band sounding overly adamant on reminding us how proudly they wear the post-grunge motif on their sleeves with tracks like Be My Girl and Living In A Dream emoting that all too familiar Seattle sound.

Despite the band’s relapse into ’90s Grunge, Sirens vaunts the odd track that testifies to the band’s invetiveness. Phosphorescence is a fine example of an unnerving grunge anthem whilst Waiting Room sees the band pauperising distortion and at their shoegazing best. This could be Forrest’s most effective vocal performance to date.

They get back onto the rugged path, showing their teeth with Find It My Own Way, a track bubbling with familiarity, although the band’s confidence more than makes up for that here. The album comes to an end with the band slowing things down and getting instrumental on Another World. It’s a perfect close-out, with the album gradually dropping off into the ambit.

Sirens is a dead cert for fans of the band’s early material and grungers alike. If you’re after something groundbreaking or innovative then you may have to pass, although no one can really sentence them for falling into an established formulaic style. It would have been a refreshing change to have had a more consistent tracklist with more than just the odd sprinkling of surprises to keep listeners on their toes. The band’s more tenebrous side comes out for a few fleeting moments, injecting some life into the album. Should Nine Black Alps decide to dabble more in these darker tones, they could be on to a masterstroke.