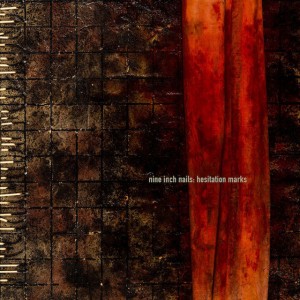 2013 is not just the year of the comeback. It has seen not only triumphant returns from celebrated artists like My Bloody Valentine, The Knife, and Daft Punk, but contemporary classics from each of those artists and from others who took extended hiatuses too. Joining them is Trent Reznor’s Nine Inch Nails.

The primary observation you make when listening to Hesitation Marks, a title that refers to hesitant cuts that people inflict upon themselves when attempting suicide, is that the album doesn’t really sound very dark, or at least as dark as its title suggests. In fact, many of its songs fit in with Nine Inch Nails’ simple, but memorable lyrics meets danceable beats archetype exemplified by Closer and The Hand That Feeds. All in all, Hesitation Marks is a catchy album, from the arpeggiated, sparkly synths of All Time Low to the industrial electronica of Copy Of A and irresistible lead single Came Back Haunted.

The most experimental and menacing Reznor seems to get on Hesitation Marks is on Dissapointed, in which Reznor does his best Kid A-era Thom Yorke impersonation, placing his voice low in the mix and hiding it behind blips until a quintessentially passionate scream-laden chorus surfaces. And eventually, the song breaks into orchestral synth swells and Reznor crooning “oooh”, rendering it not so dark after all. And the most unlikely track on Hesitation Marks is Everything, a punk song that is easily the most “pop” Nine Inch Nails have ever been: Reznor sings melodically throughout the song until a distorted, dissonant chorus, one that’s still gorgeous behind all of the effects, brings you back into your preconceived notion of Nine Inch Nails reality. And the next track on Hesitation Marks, Satellite, is almost as unlikely, as it sounds like Justin Timberlake doing industrial rock, its hand clap beat propelling the song into yet another distorted, but catchy chorus.

Most importantly, Hesitation Marks has staying power until the very end. “I think I could lose myself in here,” sings Reznor on Various Methods of Escape, a refrain that describes exactly how you feel when listening to the song in which it appears, as you find yourself singing along with the inspirational chorus: “I’ve gotta let go / I’ve gotta get it straight / Why do you have to make it so hard? / Let me get away.” And the track that follows Various Methods Of Escape, Running, is one of the only tracks on Hesitation Marks that isn’t a pure pop song, its post-punk guitar stabs complementing its On The Run-like synths. Even if Reznor’s falsetto ultimately renders Running a wannabe Radiohead song, to hear it done by Nine Inch Nails is impressive.

In sum, Hesitation Marks is not an album that’s going to change lives, nor will it likely inspire people to start a band or even affect people emotionally the way The Downward Spiral did. What it is, instead, is an album of bona fide radio hits in an ideal world, a fine example of mainstream rock at its most tasteful, music that’s going to be popular and sell a lot but that’s not afraid to subtly defy expectations of what its makers are.