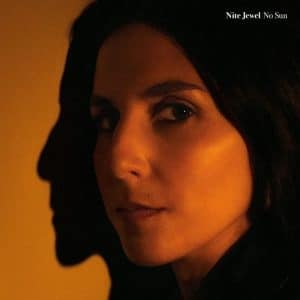 Ramona Gonzalez has been one of the more diverting characters in electronic pop since she first started making music in 2008. She can be both hyper commercial to knottily experimental and obtuse, but throughout her career she’s always been compelling. No Sun is her fifth album as Nite Jewel and is perhaps her strongest release yet. A record born from heartache, it finds the singer searching deep into her musical soul.

The record is in part a reaction to the end of her marriage of over a decade in 2018. Following this traumatic event Gonzalez threw herself into a PhD in Musicology and primarily studied how music was used in ancient Greece to document and express feelings of pain and grief in the form of deeply sad laments. These studies and reflections on the transcendent power of music to produce and amplify these primal responses from the basis of a short intense record.

The sound is largely sparse and minimal, with striking flourishes as the songs swell to stirring climaxes. Every sound, synth pulse or moog line here is in service of Gonzalez’ voice, which carries everything. In much the same way as her earliest musical inspirations like Mariah Carey, all the depth of feeling is wrapped up in the most fundamental and stunning of instruments. There’s a massive amount of soul to her voice which burnishes every song from the choral dreaminess of Anymore to the heartstopping This Time.

There is one moment though when the voice is absent and that conjures up maybe even more of a chilling response on the ghostly dreamscape of #14. When her voice comes back on the following No Escape it makes for a bewitching juxtaposition. It’s a perfect illustration of Gonzalez’s desire to do the unexpected.

The creation of this album was a huge emotional labour for Gonzalez, standing in contrast to the danceable electro of previous Nite Jewel records, but it’s certainly the most intriguing release she has put out. Entirely self conceived and produced, it’s a record of reflection but also a celebration of the power of music and the voice as an emotional salve and respite. Looking back on traditions of the distant past and moulding them within a modern sound and context, it marks a striking release from an artist that is still surprising and innovating deep into their career.