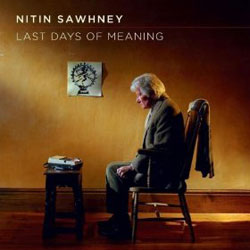 For sheer versatility, you’d be hard pressed to find anothercreative figure anywhere who can match Nitin Sawhney. Still only inhis 40s, the Kent-born polymath’s work rate and range ofachievements are quite incredible. As well as nine studio albums,he’s also found time to score the music for over 40 films, severalballet and theatre productions, advertising campaigns for Nike andYves Saint Laurent, and the soundtrack for the BBC’s acclaimedHuman Planet series. He’s collaborated with PaulMcCartney, Sting and Brian Eno, has four honorarydoctorates and was a founding member of the team behind hit BritishAsian sketch show Goodness Gracious Me. Basically, Sawhney isthe grown up, nationally successful version of that annoying kid atschool who was good at absolutely everything.

Last Days Of Meaning sees him joining forces with another famousfriend, the actor John Hurt, who narrates a number of spoken wordmonologues on the album in his role as Donald Meaning, a bitter oldman who loathes modern society and lives alone in freezing, dingyflat. Yes ladies and gentlemen, this is a full-blooded concept album,intended to provide, so Sawhney’s website informs us, “a response tothe fear, dogmatism and entrenchment we sometimes acquire with age”.Using a cassette player sent to him by his ex-wife for reasonsunexplained, Meaning listens to Sawhney’s songs, which provide asympathetic commentary on his depressing, insular little world andultimately give him hope.

Quite what the average geriatric recluse would make of Sawhney’seclectic, shape-shifting music is debatable, but for those morefamiliar with his earlier work, all the usual diverse ingredients arepresent and correct on Last Days Of Meaning. It kicks off with thebluesy harmonica and guitar of The Devil And Midnight, featuring thesoulful vocals of Phantom Limb’s Yolanda Quartey, who chastisesMeaning by singing “it’s an easy life for the angry kind with a heartthat’s growing cold/Just close your eyes and blame the world.”Confessions For The Womb has the kind of mellow coffee table beatsthat Sawhney specialises in, while Say You Will sees his other keyinfluence, Indian classical music, enter the mix for the first time.The best moments appear around the half way point with Projector, agently lilting lullaby with longstanding collaborator Tina Grace’s vocals on the chorusrecalling Nico in her pomp, and the elegantly atmosphericDaydream, a showcase for Ashwin Srinivasan’s blissful flutework.

Several of Sawhney’s albums have a central theme at their core –Displacing The Priest is a criticism of organised religion; BeyondSkin, which remains his masterpiece, reflects on the development ofIndia into a nuclear power. But unlike these two records, Last Days OfMeaning feels like a selection of disparate musical snapshots ratherthan a satisfying whole, with little coherence of style to support thestorytelling process. Although Hurt’s narration provides somecontinuity, it strays a little too close to Victor Meldrew-like parodyto be a truly convincing portrayal of a tormented man’s twilightyears, and Sawhney’s songs would frankly flow much better without hispresence.

That Nitin Sawhney is prodigiously talented is not in question, butnevertheless Last Days Of Meaning is the latest in a lengtheningseries of underwhelming, frustrating albums since theMercury-nominated Beyond Skin in 1999, characterised by uneven songwriting and attempts to stir one genre too many into the sonic meltingpot. While not as flawed and over-ambitious as London Undersound orHuman, the feeling persists that this is an artist who would benefitfrom calling a halt to all the grand projects for a while and goingback to basics.