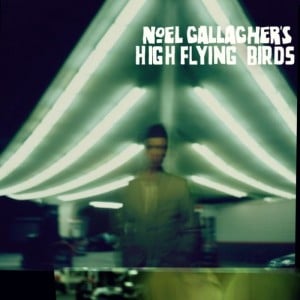 Big Brother is back. Two years on from parting company with his brother Liam and dissolving Oasis, after more than 15 years of one of the great rock ‘n’ roll sibling rivalries, not to mention selling millions of records and writing anthems for a generation, Noel Gallagher finally releases his first solo album. Can he do better than Different Gear, Still Speeding, the dull debut of Gallagher junior’s band Beady Eye at the start of the year?

The answer is yes, but not by much. As one of our finest contemporary songwriters (musically if not lyrically at least), Noel was always regarded as the talented one, with Liam providing the front man’s cocky attitude, but Noel Gallagher’s High Flying Birds does not show much development beyond Oasis. You can’t call it disappointing because it’s exactly what we might have expected from such a canny musician who’s had such massive success with his well-executed retro formula. And it sure ain’t bad because Noel hasn’t lost the knack for creating strong melodies within immaculately constructed rock songs.

Still, it’s a shame he couldn’t have taken the opportunity to be a bit more adventurous. The music is slightly mellower – there are no out-and-out rockers – as Noel seems to be moving ever nearer to the centre ground of classic rock. All the elements in the ten tracks are in the right place, but there is an air of predictability about it all. Though pleasant enough there are no electrifying moments like in early Oasis when the hairs stand up on the back of your neck. And though Noel’s singing is more subtle and limited than Liam’s, sometimes you miss his in yer face ballsiness.

The album opens grandly with Everybody’s On The Run, building slowly to an epic chorus with echoing vocals, soaring choir and sweeping strings. In the Kinksy Dream On Noel’s vocals reach even higher, underpinned by descending guitar chord changes, and backed by jazzy horns and honky-tonk piano at the end. US-only single If I Had A Gun is a yearning love song, with Noel sweetly crooning, “’Scuse me if I spoke too soon. My eyes have always followed you around the room”.

First single The Death Of You And Me is a successful mixture of a big, booming English show tune with New Orleans style brass, as Noel hits falsetto, but it’s marred by his irritating random rhyming habit: “High time, summer in the city. Kids are looking pretty, but isn’t it a pity.” (I Wanna Live In A Dream In My) Record Machine opens with kids’ chattering voices then acoustic guitar and aspiring vocals, complemented by lush strings and choral harmonies. UK-only single AKA…What a Life! builds up an impressive momentum with its stripped-down disco beat as the narrator “takes his tiger outside for a ride”.

Soldier Boys And Jesus Freaks is a piece of late ’60s psychedelic wistfulness punctured by trumpet, while the emotionally damaged AKA…Broken Arrow has a slightly gospel feel with the lyrics, “She comforts me and eases my troubled mind. She shines a light out into the shadows”. The restless (Stranded On) The Wrong Beach has some punchy garage riffs ending with the narrator “sinking in the quicksand” to the sound of lapping waves. Stop the Clocks (originally written about ten years ago but left out of the Don’t Believe The Truth album) has a dreamily droning quality but with a sting in its tail, as Noel at last lets loose a blistering guitar break.

There are certainly some nice tunes here though it’s doubtful if Underground buskers will be swapping them for the likes of Wonderwall and Don’t Look Back In Anger in their Christmas run-up repertoire. It will be interesting to see if Noel really does move out of his comfort zone on his collaborative album with psychedelic electronica outfit Amorphous Androgynous next year. We’ll believe it when we hear it.