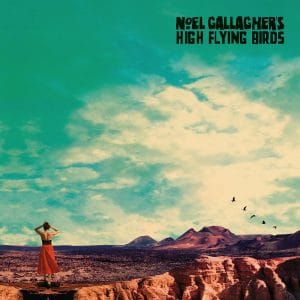 Eight years after Oasis split up, the Gallagher brothers finally seem to have moved on as musicians. Having turned 50 this year, Noel Gallagher has released his third and most adventurous solo album Who Built The Moon? the month after younger brother Liam Gallagher’s surprisingly successful solo debut As You Were. But whereas Liam is still looking to the past for musical inspiration, albeit with new verve after teaming up with other pop songwriters, Noel is now looking to go in a different direction. After the aborted experimental collaboration with Amorphous Androgynous in 2012, he has at last broken away from the solidly made but safely middle of the road retro rock of his first two solo albums and created something much more interesting.

Although all songs on the album are credited to Gallagher, there’s no doubt that working with producer David Holmes has acted as catalyst for the change. The Northern Ireland electronic musician and film composer has freed Gallagher up. In a new spirit of open-mindedness, for the first time Gallagher has developed all the songs for an album in the studio. The result is an eclectic mix of psychedelia, electronica, dance beats and space jazz as well as rock which moves along the scale from The Beatles towards erstwhile collaborators The Chemical Brothers. The tempo is upped, while Gallagher’s vocals are in a higher register than usual and the guitars are much further back in a musical mix that is highly textured.

Off-kilter opener Fort Knox – according to Gallagher himself inspired by Kanye West’s Power (yes, really!) – sets the new tone with its moody atmosphere, big beats and chanted words from female vocalist Y-See, “Keep on holding out”. Is the dissonant ringing of an alarm clock a wake-up call for a Gallagher we haven’t heard before? Lead single Holy Mountain (with Paul Weller on organ) is also a departure with its brassy glam stomp and Beach Boys-style “woo woo woo” vocal harmonies ending with a tin whistle sample. Gallagher’s voice is almost unrecognizable in this somewhat egotistical love song: “She fell, she fell, right under my spell.”

Keep on Reaching is an up-tempo soulful rocker that sees Gallagher reaching for his inner Marvin Gaye, framed by punchy horns and female backing vocalists urging us on to the “higher ground”. Second single It’s A Beautiful World is an electronic dance number about our beautiful but fragile planet, with French singer Charlotte Marionneau calling out the environmental message, “C’est juste la fin du monde”. She Taught Me How To Fly is a Blondie-like poppy love song with a driving beat as Gallagher sings dreamily “She’s out to blow my mind”.

The fuzzy Be Careful What You Wish For has a recurring riff similar to that in Come Together, with Gallagher cautioning his children not to be taken in by the lure of material success: “They let you see their riches / They never tell you what you’re worth.” Black & White Sunshine is the most traditional song with its late sixties vibe and Rolling Stones sort of muscularity as Gallagher warns: “You better get up / Before the sun goes down.” The strong influence of Holmes comes through in the ambient instrumental Interlude (Wednesday Pt. 1), which sounds like a theme for a soundtrack.

If Love Is The Law (featuring Johnny Marr on guitar and harmonica) is probably the weakest track, galloping along like a cowboy song orchestrated by Phil Spector without getting anywhere, as Gallagher sings of heartbreak: “There’s no more tears left to cry myself blind.” The Man Who Built the Moon is a richly orchestrated track with a seductively dangerous ambience that sounds like Gallagher auditioning for the next Bond movie, as he darkly predicts, “You and I / The spider and the fly / Will meet where the shadows fall”. As its name suggests, closing instrumental End Credits (Wednesday Pt. 2) follows on as another mini-film composition – who knows, perhaps pointing towards Gallagher’s next phase.