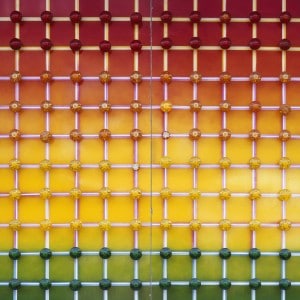 Hollywood couldn’t have written a better script for the nonkeen backstory. Like a modern-day Stand By Me, albeit without anyone dying, three childhood friends – Frederic Gmeiner, Sebastian Singwald and the slightly more famous Nils Frahm – reunite and dabble in the studio on their formative taped get-togethers, never intending for what they created to see the light of day.

But see the light of day The Gamble has. Recorded essentially over their whole friendship, the works were revisited from degenerated originals spawned in the early ‘90s by Frahm with additions and re-recordings from the other participants. Frahm is primarily known for his sparse, neo-classical piano-led albums, so it is surprising to find a distinct warmth to these digital-polished analogue curios.

The symphonic uplift of opener The Invention Mother (a sly nod to Frank Zappa?) burbles along on rising and falling scales, never arriving at a destination. But it makes the brief journey into Saddest Continent On Earth more pleasant. Basking on warm Rhodes piano chords and a juddering, spindly guitar figure it is tentative and uncertain, evoking moods of displacement and a haunting urban quality. Textures of sound seep into the track like it’s picking them up as it rolls on the periphery of definition.

Ceramic People explodes as drums burst forth in a riot of jazz fills, cascading piano loops and a restless skittering percussive beat drives the track along, rather like Kieran Hebden’s (Four Tet) side project Fridge. Animal Farm continues the busy rhythms, pulsing on insistent percussive loops, while dark and light synth washes loom into view. Vocals appear briefly, dark and distorted as another element in the mix rather than anything specific.

Holding the centre of the album together is the key piece, This Beautiful Mess, the most complex and rich track here, with melodies that surge into each other in a riot that is barely under control. Cymbals tinker and crash as keyboard lines flit in over guitar figures and bass thrums to create some wonderful dischord that almost gets lost in its layering.

Following this is the disturbed calm of Capstan, full of rolling timpani drums and marimba offering up a smoky jazz club where you’re never sure where the next glitch is going to come from. Chasing God Through Palmyra is locomotively repetitive with more looped indecipherable lyrics. Pink Flirt (of course) follows the mood with recordings teetering on the verge of breaking down (through age, treatment?) to lead neatly into album closer Re Turn. A neat summation of what has gone before, clipped chords expand over washes of tweaked organ-based swells to unpick any remaining tensions by offering up a musical balm (of sorts) to conclude a journey you never knew you wanted to take, the destination was uncertain and was never reached. Resolutely dodging any pigeonholes, the influences are there in the locked-in krautrock rhythms, the spatial euphoria of minimalism, shadows of dark techno and even (whisper it) jazz.

Seamlessly the tracks all flow together in one continuous mix making this work as a whole album. nonkeen don’t appear to have to a particular message to convey, or even have an eye on developing this project beyond the dabblings of friends having fun. Pieces have no pretensions beyond creating moods by the layering of sound textures that veer from ambient to more techno-influenced pieces. The Gamble overall appears more of a curio of juvenilia revisited than an essential piece of new Frahm music.