Norah Jones – Pick Me Up Off The Floor 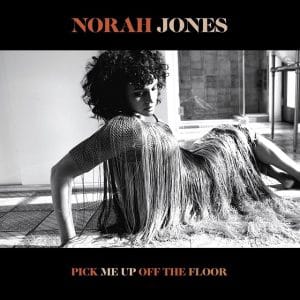 There’s a line in Heartbroken, Day After the fourth song on Norah Jones’ new album where she sings “our world is wasting away, and it’s too much to face”. She may be singing it in a personal capacity about a human relationship, but there’s wider significance in the context of the album.

Pick Me Up Off The Floor is a reaction to the sense of disbelief and confoundment that comes with the many negative global events of recent years, whether political, environmental or social. The album was recorded before the pandemic and recent racial tensions in the USA and had she known what was coming you sense it might have been even more strongly worded. An air of sadness settles over much of the album and there’s the occasional lyrical molecule of unexpected grit among the smoothness and fluidity.

Musically it carries on from her last full album, 2016’s Day Breaks but there’s more in the way of subtle embellishment and the songs feel more defined and a little bolder. It’s heard early on in Flame Twin which begins with whispered, sensuous disclosures but builds into something more overt, spirited and high resolution. Later, Say No More has an urban, metropolitan breeziness, largely as a result of the horns that gently propel the song along. It also finds her more open lyrically, focusing on human relationships (“stay the night, I’ll pretend that I put up a fight”).

Even the more melancholic songs have a vividness that ensures they more than stand their own ground. Opener How I Weep is a light collage of piecemeal sonic elements, all held together by her soft, luxurious voice while Hurts To Be Alone is arguably the standout track on the album, the sweetness in the bounce of her piano playing and warmth of the organ offsetting the introspection of the lyrics (“everybody is my friend, until I run into my end”). Heartbroken, Day After meanwhile feels more unambiguous in its sentiment, the closest the album comes to a tear-stained jazz standard.

The mid-section of the album contains a run of three songs that all directly reference life in their titles. On This Life there’s a tangible sorrow in the slow, lingering vocal delivery as Jones ruminates on how “this life as we know it, is over”. It isn’t about the current situation but if you didn’t know when the song was written it wouldn’t be hard to interpret it that way. To Live offers more in the way of doleful, subdued moods before things pick up on I’m Alive, co-written with Wilco’s Jeff Tweedy. It feels almost like a celebration of simply surviving amid the chaos and uncertainty and there’s also some welcome signs of optimism in the final line for us to cling on to: “It’s alright, it’s ok and if not maybe things will change.” Album closer Heaven Above is similarly hopeful, another track also co-written by Tweedy.

At times Pick Me Up Off The Floor feels like a welcoming musical refuge. It’s an intimate, empathising support mechanism of an album, well-placed to respond to the emotional needs of listeners during these turbulent times.