Nothing But Thieves – Moral Panic 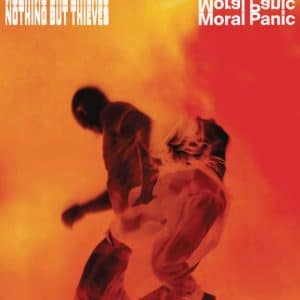 It appears that Nothing But Thieves haven’t kicked their habit of making anthemic hits. Now, with a combination of frontman Connor Mason’s intense vocal skills, angsty guitar reminiscent of baggy maximalist era Kasabian or – at times – a softer Snow Patrol nostalgia, and a whole load of gritty breakdowns, the Essex-based band have turned the feeling of moral panic (of which we are all now too familiar with) into a living, breathing, and characteristically anthemic, beast of an album.

Phobia is one of the standout tracks of the album, despite having none of the easy likability and nostalgic Amsterdam tones of modern rock single Is Everybody Going Crazy?, or the eeriness of later single Real Love Song. Mason’s vocals stalk and crawl through the insistent beat, with a guitar riff exploding halfway that is both discordant and delicious – it’s decidedly the least sonically friendly track of the album, switching keys and tempo faster than some people’s attitude to masks. However, its wicked lyrics, menacing instrumentals and that hypnotic hook all contribute to a track which seems to full force sweep you under; both the calm before the storm and the storm itself.

The title track Moral Panic is similarly flighty, representative of the album as a whole as one which both sonically and lyrically explores the dichotomy between expansive anxiety of the unknown and more introspective worries. Besides being timely, it’s addictive, with highly danceable synth keys, cheeky claps, and a heavy palpitation of a beat that speeds away from you.

Impossible, one of the more recent singles, is the polar opposite; it’s linear, a building track that never attempts any sonic departure from its rock-ballad sound, with signature Nothing But Thieves euphorically sad lyrics. This track is, in the best way, one of the most simplistic that the band have ever attempted. Impossible is a cathartic breath of fresh air in the chaotic heaviness of the rest of the album – still including Mason’s cavernous vocals, it is wistful and romantic but it never completely loses the dark, gritty sound that makes Nothing But Thieves. Free If We Want It is similarly intimate, being the closest Moral Panic comes to indie-pop, with minimalist instrumentation and a euphoric Panic! In The Disco style bridge all contributing to the 2000’s nostalgia that reverberates throughout the album in Real Love Song, This Feels Like The End and There Was Sun.

Real Love Song, however, takes a darker tone to this nostalgia, adopting a similar sound to early works of The Killers, with skilful use of bass and haunting guitar riffs to create a rock-punk spin to the traditional love song. The lyrics are as equal parts expected and clichéd as they are fun (especially that Nick Cave line), but Mason’s voice is emotive as he sings about how stupid, passionate and just outright painful love is – “This is a love song, so what?/ Did it slide into your heart?/ I guess not/ I still want your love/ A whole lot/ Have you heard a better song?/ Oh, I hope not.”

The only gripe to be had with Moral Panic is that towards the latter half of the album the tracks falter slightly, but only insofar as the rest of the album is pure magic. Before We Drift Away and There Was Sun are pretty, but far less memorable than Unperson or This Feels Like The End. Ultimately, though, Moral Panic gives a clear message: Nothing But Thieves don’t play with idealism, or with anything less than dangerously full-force emotion. This is an album which, although it encompasses many feelings, never seems to fully settle on one – and therefore it’s both incredibly prescient and incredibly easy to get lost in its whirlwind wonderland of bittersweet narratives.

Nothing But Thieves MP3s or CDs

Nothing But Thieves on Spotify