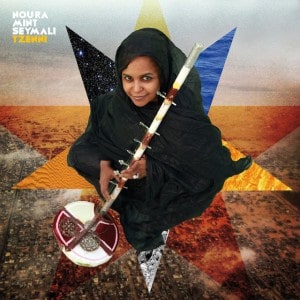 Noura Mint Seymali deals in the form of intoxicating desert blues most often associated with ensembles from Mali (Tinariwen and Tamikrest being the most well known examples for international audiences), although she is in fact a griot hailing from neighbouring Mauritania.

She began her musical work as a backing vocalist for her stepmother Dimi Mint Abba and is now being introduced internationally as a powerful, compelling artist in her own right (and, interestingly, she revisits Tikifite here, a song regularly performed by Dimi). Already something of a star in Mauritania, Tzenni suggests that Seymali’s talent deserves to be heard around the world.

Seymali’s desert rock is chiefly characterised by the integration of her ardine (a nine string harp traditionally played exclusively by women) with the strident, strafing electric guitar of her husband Jeiche Ould Chighaly. The sound extends and develops the fusion approach of her Azawan EP. What is perhaps most striking is Seymali’s extraordinarily dexterous and powerful voice, which projects with crystal clarity whilst darting through some tricky melodic intervals. The long notes she holds with unwavering consistency on Soub Hanallah are remarkable.

>Where this music is sometimes recorded with as dry and ‘live’ a sound as possible, Tzenni luxuriates in reverb and delay (Daniel Lanois’ fusion of sounds drawn from West African music with his own take on rock production values for Emmylou Harris’ Wrecking Ball might be a useful reference point for the uninitiated). This is perhaps most effective on the bold, urgent and forthright title track, although pretty much everything here is delivered with immediacy and authority. The West African-western rock fusion is also brilliantly encapsulated in the shimmering El Barm, which starts out as a relatively conventional 6/8 groove with a backbeat, before venturing out into more inventive and distinctively West African rhythmic territory.

The foregrounding of electric guitar and the reliance on solid bass guitar grooves appears to have been at the instigation of drummer and producer Matthew Tinari. Whilst it might have been initially provocative and divisive as a strategy, it appears to have paid dividends in the realisation of Tzenni as a coherent and satisfying whole. It is worth emphasising, however, that this cohesiveness is achieved as much through the presence of reworked traditional Moorish music as it is through the role of the rock rhythm section, not least in the distinctive modes and scales through which the unusual sounding melodies and motifs are constructed (sometimes they share qualities with the blues, but at others they seem far less familiar sounding).

There is an energy and restlessness here that feels transporting. Also, there’s a strong sense of constancy and an unwavering accuracy in the way this music is executed. It is at once trascendent and grounded. Although the melodies are sometimes strange, they are lingering and memorable (the opening Eguetmar feels as if it should be hummable in spite of its unusual intervals).

Tzenni is full of strange, satisfying and enriching moments. The loping, lopsided riff that introduces Hebebeb (Zrag) is brilliantly disorientating, whilst El Mougelmen is direct and empowered. The album’s title could translate as circling or spinning and this seems appropriate as the music often seems to have either a circling or vertiginous quality to it.