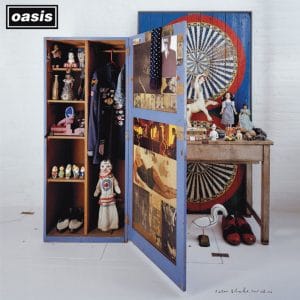 Noel Gallagher once famously claimed that the only time there would be an Oasis ‘best of’ collection would be once the band had split. Yet he reckoned without the power of major record labels.

So when Sony informed him that they were releasing a Oasis compilation in time for Christmas, Gallagher sensibly decided to swallow his pride and make sure that he was heavily involved. So, rather than a lazy ‘singles’ collection, we have Stop The Clocks, with a 18 strong track listing personally chosen by Noel, and including not just singles but also album tracks and B-sides. Best of all, there’s no specially recorded new material in order to tempt the completist.

It’s a great move as Oasis have always been about more than just A-sides, despite releasing some of the great singles of the past decade. And while the track listing here may be debated over for years to come by fans, there’s no arguing that it demonstrates exactly why Oasis have impinged so heavily on the national consciousness since their incendiary arrival.

We have five tracks each from the band’s first two albums, one each from Heathen Chemistry and Standing On The Shoulders Of Giants, two from last year’s Don’t Believe The Truth and four B-sides. Be Here Now is conspicuous only by its absence.

It opens, inevitably, with Rock N Roll Star, and from the first thrilling guitar riff it’s clear that it still sounds as timeless as ever. It’s a song for every kid trapped in a small town dreaming of making it big, and it’s sung with such utter conviction and belief by Liam Gallagher that you can’t help but believe the clarion call of “tonight I’m a rock’n’roll star”

The strongest tracks come from the first two albums, with Live Forever still capturing the indestructible feeling of youth, Don’t Look Back In Anger still sending goosebumps down the spine with its opening piano chords and, even though we’ve all heard it countless times, Wonderwall is impossible to grow tired of – a true modern classic. Best of all, there’s Slide Away – one of the greatest album tracks in any band’s canon.

The latter songs do pale a bit in comparison to the Definitely Maybe and Morning Glory material, but at least Gallagher has had the nous to pick the most memorable songs. Thus, we get one of Standing On The Shoulder Of Giants’ few decent tracks in Go Let It Out and Liam’s touching ode to Nicole Appleton, Songbird, is Heathen Chemistry’s sole representative.

It’s the addition of the B-sides that give this compilation another dimension though – mostly showing off Noel’s sensitive acoustic side, they give the lie to the Gallaghers being stereotypical Northern oiks. Talk Tonight is just lovely, so roughly recorded we even hear Noel coughing at the start, while Half The World Away (probably best known as the theme to The Royle Family these days) is similarly reflective and understated.

There’s also room for Acquiesce, generally regarded as the best Oasis single that never was – an anthemic powerhouse of a song which is one of the few songs that feature the Gallagher Brothers duetting. Hearing them sing “‘cos we need each other, we believe in each other” is an oddly touching moment, especially considering the macho posturing that both brothers often hide behind.

Of course, any Oasis fan worth their salt will have every track here already, but that’s not really the point. Stop The Clocks is the compilation of the year, a chance to assess just why they’re such a special band and exactly how Noel Gallagher has become the defining songwriter of his generation. Absolutely essential.