Oddfellow’s Casino – The Cult Of Water 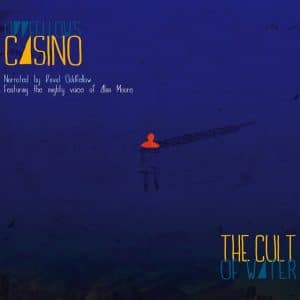 David Bramwell (or David Oddfellow as he refers to himself in the context of this musical project) has been making music under the Oddfellow’s Casino name for over 20 years, releasing albums that largely focus on lesser explored subjects but, on the surface, his latest is different in that it addresses the universal, essential commodity of water.

Yet, in typical Bramwell fashion, what follows is a richly evocative offering, part personal memoir and part expanded narrative that draws from water’s broader guises, representations and metaphors. It’s all conveyed via his calmly authoritative yet inviting spoken word delivery, which sits in front of an engaging sonic backdrop that incorporates electronic and acoustic sounds, as well as field recordings and other human dialogue.

The album begins with Bramwell recounting moments from his early childhood in Doncaster that tie in with the album’s theme. The river Don is central to the album’s story (as are waterways in general) but the UK heatwave and subsequent drought of 1976 also feature prominently early on, as does a family trip to see a ‘drowned church’ in Derbyshire (a consequence of the decision to create a reservoir to serve the local area by deliberately flooding the small village of Derwent).

It’s far more absorbing than it may appear on paper, especially when he then embarks on a wide-reaching journey that takes in references to mythology, history, religion, architecture, nature, topography and psychogeography. Bramwell also recalls the origins of his thalassophobia, his fear of dark water, another intriguing, recurring presence in the story.

The album features spoken word contributions from writer Alan Moore, described by Bramwell as “England’s greatest living wizard”, who adds further detail. More voices and characters appear along the way, whether Donald Pleasence in the context of a 1970s public information film warning of the hazards of children playing next to water or Anwen, a “witch” from the Peak district who Bramwell visits to seek direction in his quest for understanding. It leads to an episode where he imagines himself travelling back in time to the Roman era to uncover more about the river’s background.

There’s a scholarly quality to much of the album, especially to tracks like Connected By Time’s Arrow And Time’s Circle which demonstrates Bramwell’s joy in extracting truths from texts and literature. From Swerve Of Shore To Bend Of Bay meanwhile takes its title from the opening line of James Joyce’s Finnegan’s Wake.

Weeds Become Hair is arguably the darkest point on the album, both musically and lyrically. The origins of the album first appeared as a radio programme and moments like this show how it works especially well as late-night listening. The album also occupies similar ground to Chanctonbury Rings, the equally alluring 2019 album by Justin Hopper, Sharron Kraus and The Belbury Poly.

Cast Your Swords, Coins & Shields Into Her Waters, Boys! closes the album, all spine-tingling poetry and brass before it exits aptly to the sound of onrushing water. The Cult Of Water shows how Bramwell is a one man resource for compelling stories that touch on the occult, the underground, the folkloric and the mysterious. In years to come there’s a good chance his albums will move into cult territory themselves; deep, ambitious affairs that offer entry points into fascinating subjects. “All art is an act of magic,” he remarks at one point on the album and, with The Cult Of Water, he’s just provided his own small, personal proof.