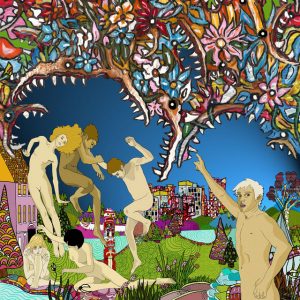 …this one’s a complete BEAST!

look at how that gold catches the light

Guys can fake it? Unbelievable. The One thing that’s ours!

We can do it soft-core if you want, but you should know that I go both ways

When you flick across channels sometimes it makes sense in a weirdly disjointed way and sometimes it’s complete gibberish. Welcome to Of Montreal‘s latest album, a musical version of channel hopping. Skeletal Lamping is nothing if not confused, but it never once descends into gibberish. But then this is an album that deals primarily in sex, and if there’s a subject guaranteed to get people confused, then it is sex.

Kudos then to Kevin Barnes, the man who basically is Of Montreal as he lays bare his take on the sexual world. Constantly switching roles as the album progresses: at times he’s a prostitute, then a prude, then afraid of experience, and sometimes he’s a black shemale named Georgie Fruit (who first made an appearance on the Hissing Fauna album). This is not your normal run of the mill album then, as it takes on sex from a variety of positions, some romantic, some lustful and some downright violent.

If the lyrical themes are challenging then it is perhaps appropriate that the music is too. Not dissimilar in sound to Hissing Fauna, Barnes sticks to the lightweight funk sound that he started to explore last time out. This time however the songs are less structured, flitting between ideas quickly.

At times themes are explored at length, but more often than not Barnes changes direction quickly and without warning. The effect of this is at times jarring, and occasionally annoying – particularly when he develops an idea so harmoniously perfect it sings like an angel, only to drop it seconds later.

Ultimately, it forces you to listen, and to revel in Barnes’ exemplary ear for a pop hook, of which there are many throughout Skeletal Lamping. 15 tracks might be listed, but there are enough ideas here to spawn about five albums. At times things border on the abstract, but Barnes has enough sense to keep things just tight enough so that the songs don’t run away from him completely.

If all this sounds disconcerting, then it is worth considering that Barnes has come up with an album to rival any of Prince’s when that particular pop pixie was at the height of his game. Skeletal Lamping has more depth hidden in its complex maze of schizophrenic pop songs than almost anything you’ll have heard for many a year. If you’ve got the patience, this is an album you can get lost in for a long time.

Skeletal Lamping flicks across channels like a man with an itchy trigger finger who trigger finger is actually itchy, but it excels in making a brilliant kind of sense. Kevin Barnes’ voice stands out clear throughout, and it is one of a man who might well be the brightest musician of his generation. Of Montreal demand your attention, so don’t switch the channel.

Of Montreal MP3s or CDs

Of Montreal on Spotify