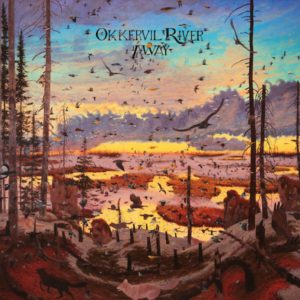 After a slightly disappointing last couple of albums, in particular the over-egged bombast their most recent release, 2013’s The Silver Gymnasium, the arrival of a new Okkervil River record posed some intriguing questions around whether the Texan band had simply experienced a temporary dip in quality or are already past their peak.

The period from 2013 to 2015 had been a challenging time for Okkervil River songwriter and front man Will Sheff, with members of his backing band moving on to family life or to their own projects and Sheff himself spending long hours in a hospice with the grandfather he idolised while he died. A friend offered the use of an empty house in the Catskills where Sheff could go and clear his head and the new songs soon started flowing. Sheff slowly realised he was writing “a death story for a part of my life that had, buried inside of it, a path I could follow that might let me go somewhere new.” The end result is arguably the best album of Okkervil River’s career to date.

Away’s nine long tracks (most clocking in at over six minutes) are a consistently wonderful masterclass of graceful, stately yet understated songwriting, with some gorgeously expressive arrangements adding dashes of colour to the nostalgic, often bittersweet tales of memory and loss.

The album starts as it means to go on with the hauntingly powerful Okkervil River R.I.P, a title that encapsulates the sense of a personal turning point which characterises the whole record. Kicking off with a simple guitar strum and Sheff’s yearning vocal, it vividly depicts a man struggling to come to terms with the changes in his life going on around him – he admits at one point “I was turning 38/I was a horrible sight” – before reflecting on the deaths of his beloved grandfather T Holmes Moore – whose presence is palpable throughout Away – as well as musicians such as the tragic Judee Sill, who died alone of a drug overdose aged just 35, she and her songs forgotten by the world. Flecks of piano, organ and violin are delicately added to the palette without ever being allowed to dominate the sensitive portrait Sheff is painting.

Okkervil River R.I.P sets a high bar but the rest of Away mostly matches it. Other undoubted highlights include the sumptuously orchestrated Call Yourself Renee, which tells the tale of a lonely drifter finding solace in isolation; and the beautifully unhurried She Would Look For Me, with its elegant, meandering flutes and floating organ; but the pinnacle arrives with the quietly stunning Comes Indiana Through The Smoke.

Perhaps the most heartbreakingly personal song on the album, focusing directly as it does on the actual death of Sheff’s aforementioned grandfather, it also has Away’s most unforgettable melody, with the track’s title softly chanted by Sheff accompanied by a piercing oboe. Full of striking lyrical images, it even works in an elegiac trumpet line played on T Holmes Moore’s actual own instrument.

It could be said that Away isn’t really an Okkervil River record at all. Drummer Cully Symington is the only survivor from the band’s last line up and the ensemble here is otherwise made up of high quality guest musicians, including members of the orchestral ensemble yMusic and Boston-based singer Marissa Nadler, who provides ghostly harmony vocals throughout. It feels like a Sheff solo album in all but name, yet the change in approach has breathed new life into his work and helped him deliver an album that is both impressively bold in scope and magically intimate.