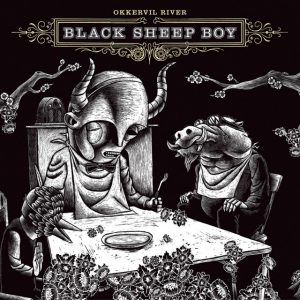 Texas has given the world many things of dubious quality; shoulderpad-riddled ’80s soap operas and the family Bush being principal among them. But, for whatever blessed reason, capital city Austin appears to exist in its own cultural bubble, immune to the excesses of the Lone Star State. Austin is of course the home of cinema’s slacker auteur Richard Linklater (director of Before Sunrise and Before Sunset), who made his name filming the city’s laid back and vaguely boho inhabitants, and also to this lot: Okkervil River are a wonderful find, creating delicate, literate folky rock music of the very best kind.

An unknown quantity, to me, before the first listen, by the third play I was already plotting which of my friends I would lend it to and reprimanding myself for not having come across them sooner.

Black Sheep Boy is the fourth album from the intense quartet fronted by Will Sheff. Inspired by Tim Hardin’s titular song, a minimal cover of which acts as an opener, the album takes the form of a narrative journey. For some this is bound to set alarm bells ringing, to set the tainted words “concept album’ flashing in their head. But they needn’t worry. Because all that really means is that this album boasts a lyrical continuity – a kind of progression – that only adds extra layers to your enjoyment of the music.

In fact the lyrics are a continual joy on this album, a source of real pleasure. Okkervil River write intricate, unsettling songs full of fresh imagery and emotional tripwires. Blessed with a rich vocabulary and a spot-on sense of meter, this means that even lines which superficially offer little you haven’t heard before are given distinctive twists: on Song Of Our So Called Friend he sings: “Your face’s falling tears, to me they’re lovely and they’re dear, though you don’t love me and it’s clear, that I will never see you in my arms.” Sheff’s rhythm and delivery lifts this sentiment to a different, stranger place – he has a poet’s sense of pace and wordplay.

A Gothic thread runs through much of Black Sheep Boy, a lyrical fascination with blood and blades and the blackest of emotions. Anger and pain have rarely been so eloquently depicted. The appropriately named song Black has to be one of the catchiest songs ever written about abuse and revenge; Sheff yells: “And I tell you like before, that you should wreck his life the way that he wrecked yours.” It’s complex track, moving and powerful on a number of levels, full of impotent rage and a rare emotional intelligence. Like so much on this album it rewards repeated listens.

And there’s further subtle delights to come. Get Big is an unnerving morning-after duologue featuring delicate female harmonies; the elegant A King And A Queen employs rich mythical imagery (“to lie by your side for sublime centuries”) to very moving effect. The album is full of stories within stories and repeated motifs; it has its own internal workings that only slowly reveal themselves.

Though the lyrics are certainly the thing here, musically Okkervil River aren’t exactly slackers, layering strings over some inspired percussive touches – and even employing a mandolin at one point. Will Sheff’s voice is also very agreeable, gruff yet deceptively delicate in places and more than capable of rising to the occasion, so to speak, particularly in the soaring finale to So Come Back, I Am Waiting.

Yes they have a wilfully difficult name (it’s a real river near St Petersburg apparently) and cover art that resembles the kind of thing a fifteen year old Marilyn Manson fan might scrawl on their school exercise books. But none of that matters, because ultimately Okkervil River make beautiful music; melancholic yet euphoric stuff – songs that get under your skin.