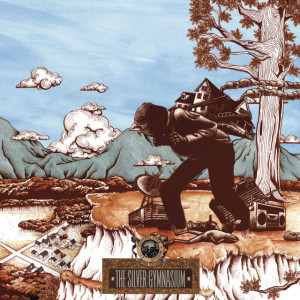 While it’s not as purely emotional or cathartic as 2005’s Black Sheep Boy or 2007’s The Stage Names, Austin indie rock staples Okkervil River‘s latest album, The Silver Gymnasium, is perhaps the best effort from the band since that previous spell of brilliance. And while it may not contain one standout song like Lost Coastlines from 2008’s The Stand Ins, The Silver Gymnasium is consistent and cohesive in its portrayal of innocence, childhood, and growing up, themes to which every listener can relate.

The Silver Gymnasium opens strongly with piano pop track It Was My Season, on which Will Sheff recounts a controversial romance. From the start, it’s nice to hear the almost Pete Townsend-like yearning in Sheff’s voice back again, but the true standout aspect of the opener is its solid pop songcraft combined with its optimistic lyrics. Indeed, just as Townsend sang about how it was going to be a good year on Tommy, Sheff’s looking forward to the blossoming of a forbidden romance with the naivete of a 20-year-old: “We’ll meet on the weekends / Your dad won’t be home,” he sings. This won’t work out because, well, it’s an Okkervil River record after all, but it’s easy to identify with the youthful optimism.

Thus, from the start, Okkervil River evoke the nostalgic, pre-high-school feelings of the album’s title: Sheff and company place themselves in the heads and hearts of the young. More fitting still, then, is the ’80s-sounding, disco beat-laden, six and a half-minute Down Down The Deep River. Not only does it sound retro, but its title features and effectively recalls one of the most well-worn rock and roll cliches ever: washing your sins by the river, or even simply just being near a river for its symbolic purpose. In the case of Down Down The Deep River, the river represents the innocence that Sheff has lost, as he recalls a time camping down the river, talking to his co-campers about bad men, or those who have sinned, with the wide-eyed curiosity and fear of a child.

What’s perhaps the most touching and captivating about The Silver Gymnasium is that it or its characters mature as the album progresses. Fifth track and emotional centerpiece Lido Pier Suicide Car portrays the young dealing with something beyond their capacity to understand: watching old friends fall away, as the song so aptly describes. But unlike the miserabilism that pervades even Okkervil River’s best records, Lido Pier Suicide Car is a tale of mourning and loss but with the sound of optimism and recuperation. Where this newfound sense of hope stems from is unknown. However, even if it’s not as gleefully morose as Okkervil River’s fatalistic interpretations of pessimistic Beach Boys songs or ill-fated porn stars, it’s a logical step for yet another indie rock band growing as people and getting older.

All the which makes the title and sound of synth pop standout Stay Young ironic and all the more effective. With Stay Young, Sheff and Okkervil River illustrate that you can be mature and, somehow, still stay young, the spontaneity of all of the song’s different instruments, from harmonica to synths to saxophone, somehow magically mashing to form a cohesive diatribe against those who judge. And after listening to Stay Young, it seems as though only the drunken sea shanty aficionados that are Okkervil River could pull off this Talking Heads-like old time pop song. Indeed, Stay Young underlines just how remarkably consistent Okkervil River are within and among all of their records. This time around, they’ve toned down on the drama and, despite Sheff wanting to make this album quickly, seem to have taken the time to recount the past so they can tell their stories with appropriate reverence to being young.