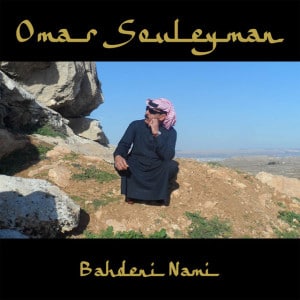 How refreshing it is to be able to report on that rare thing these days, a Syrian good news story.

For that is what Omar Souleyman is able to provide, despite his position as a Syrian musician in exile. With the release of Bahdeni Nami the ratio between his studio and live albums narrows to approximately one in 250, the wedding singer turned recording artist having dispensed copies of many of his sets to the happy couples involved. Yet even if you were in the unlikely position of having heard all 500 of his albums, you would surely find this music to be defiantly unique – and now it comes with contemporary electronic dressing.

Souleyman has made the combination of dabke and electronica his own, and for his second studio album enlists the help of Four Tet – who helped produce the first album, Wenu Wenu – Gilles Peterson and Modeselektor, who also do him the service of releasing the record on their Monkeytown label.

The use of electronics – rooted as they are in Souleyman’s ever-present collaborator Rizan Sa’id‘s battered, overdriven synth riffs – makes the music entrancing and approachable. The music of Bahdeni Nami retains the raw, celebratory impact he has become known for, and the three production units recognise this and harness it as the album’s power source.

Souleyman is a past master at building an impressive momentum with his beats and maintaining it – or, in the case of Leil El Bareh, jumping right in at a furious tempo, pausing only for the key declarations of the song. There are opportunities for breath, though – Mawal Menzal throws a deceiving curveball by starting off at a relatively slow tempo, yet the picking of Souleyman’s fingers remains at a fiendish level of difficulty. Darb el Hawa, however, is slower by design.

The Modeselektor productions place more emphasis on percussion and bass. They move at a frenetic pace, as though trying to keep up with Souleyman, answering his vocal entreaties with an instrument that sounds like an electronic manipulation of Syrian bagpipes. When it cuts into Darb El Hawa after the grand introduction, the effect is thrilling, even before the rolling percussion comes back in. This song puts extra echo on Souleyman’s voice, as though trying to refract it through the Middle Eastern valleys.

The celebrations reach their peak in Enssa El Aatab, in which Souleyman can be heard dancing around the studio amid the rolling percussion. Legowelt, meanwhile, adds weight and electronic squiggles to a bonus remix of the title track, closing out the album.

If you are approaching Souleyman’s music from the Modeselektor direction then this is a great place to start. If you’ve followed his career for years you may feel the electronic dressing smooths off a few of the appealingly rougher edges of his and Sa’id’s sound – but if anything they show just how far ahead he remains stylistically.