by Jude Clarke
published: 10 May 2010 in Album Reviews
Tweet 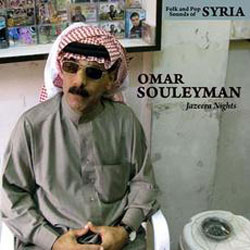 For anyone as yet unfamiliar with the music of Omar Souleyman, a little background information is probably necessary. A superstar in his native Syria, Souleyman has for years been the go-to guy for dabke, “folkloric dance and party music” from the north east of the country, with the emphasis very much on the party.

Souleyman has performed all over the region, releasing literally hundreds of cassettes, sold on markets all over Syria. His popularity originally spread to Saudia Arabia, the UAE and Lebanon, until in 2006 the American label Sublime Frequencies paired up with him to release a compilation of his work, Highway To Hassake, for release in the West.

Anyone who witnessed last year’s revelatory UK performances will attest to the transcendent live show put on by Souleyman and his band. It includes not only talented keyboardist Rizan Said and Ali Shaker on electric saz (Ottoman lute) but also a mysterious figure known only as “The Poet”, who alternately lurks in the background, dabs sweat from the front man’s sweaty brow and whispers cryptically into his ear. New collection Jazeera Nights – a retrospective featuring 15 years’ worth of live recordings – has doubtless been released to capitalise on the higher profile and immense goodwill that the band built up on tour.

Removed from the hot-and-sweaty gig or party setting which is the music’s most natural environment, there is still much here to relish. The pace, already fast and furious on opening track Hafer Gabrak Bidi (I Will Dig Your Grave), is sustained and actually ramped up over the course of the ensuing three tracks. Ala It Hanash Madgouga (The Bedouin Tattoo) is a highlight, with its four-to-the-floor propulsive rave intensity, accompanied by a diversity and range of percussive sounds that prove almost as exhilarating on record as live. Track five – Labji Wa Bajji Il Hajar (My Tears Will Make The Stones Cry) – sees a change in pace, with one of the collections three slower, more mournful tracks. Distinctly downbeat, with a melancholy vocal that at times is almost a wail, this, along with Mandal/Matel U Sukkar Ala Il Shai (I Don’t Know/Like The Sugar In The Tea) and Eih Min Elemkom (From The Day That I Told You) serves as an evocative period of respite from the freneticism of the rest of the album.

To Western ears, or for those unfamiliar with the language being used, clues as to the sentiments behind the songs can be gleaned both from the helpfully-provided English translations of the titles, but also from Souleyman’s varying vocal delivery. As well as singing, he is also fond of the dramatic interjection – “ela ela” and “AAAAAAAIIEEEEEEEEEEE” being the most common and celebratory-sounding. Elsewhere his delivery is serious, discursive, almost spoken rather than sung, as on Hafar Gabrak Bidi and Hot Il Khanjar Bi Glaibi (Stab My Heart). Sometimes the voice is harsh, guttural, and at others melodious and insinuating, following and mirroring the beguiling instrumentation of his band.

As an introduction to a genuinely street-level musical form and one of its most prolific and incendiary artists then Jazeera Nights is undoubtedly worthwhile. If you are fortunate enough to have the opportunity of catching a live show, however, then you are even more wholeheartedly recommended to do so, to get the full effect of this dizzying, dramatic, entrancing music.