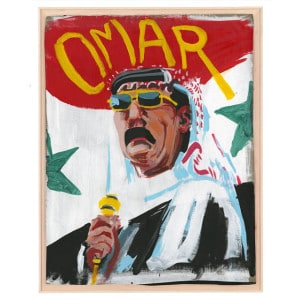 With the bleak and increasingly desperate ongoing internal conflict, the news out of Syria in recent years has been unrelentingly distressing. Although his music represents the antithesis of everything that his country has tragically come to symbolise to most in the West, Omar Souleyman, a musician from Ra’s al-‘Ayn in the northestern region of Syria, at least partly has an implicit mission to present Syria and its culture in a positive way.

Souleyman takes dabke, a traditional wedding dance and musical style, and, along with his musical partner, the keyboard player and composer Rizan Sa’id, makes of it a joyous and celebratory fusion. Having released more than 500 cassette albums (usually recorded live at weddings, then copied and sold in local kiosks), his music has had a wave of popularity in the West since Sublime Frequencies brought him to wider attention. He has since collaborated with Björk, Caribou and, inevitably, Damon Albarn.

After three compilations and a live album, and not forgetting those 500+ early cassettes, comes Wenu Wenu, Souleyman’s first studio-recorded album. With Four Tet‘s Kieran Hebden on production duties, the key question on approaching this release would be just how much the distinctive style, the sense of place and function of the music would be altered or affected by the studio setting. The verdict: surprisingly, pleasingly little.

Although its very opening notes, as title track Wenu Wenu (translated as ‘Where Is She’) begins, sound reminiscent of S’Express‘s Theme From S’Express, the album soon settles into familiar dabke rhythms. Much of the music’s appeal is the blending and weaving of the keyboard and vocal tunes, often taking a call-and-response pattern, as witnessed here on Ya Yumma and Nahy.

Punctuating this are Souleyman’s usual imprecations, although perhaps slightly less frequent in appearance than on the 2010 live album Jazeera Nights. So on Wenu Wenu we get a “Eiiiihhh-uhh”, while the fast and furious Ya Yumma sees him declaring “Ehhhhhuh”, like a party-crazed Arab Fonzie, and the closing track Yagbuni has another ascending, incendiary “Eiiihhhhh”.

The percussion still often sounds like its rhythms are being bashed out on a collection of tin cans (see Warni Warni), but still, crucially, underpins the music, propelling everything else forward and contributing much to its addictive danceability. Never do you forget that this is dance music, in one of its most elemental forms. The suggestion of more – for want of a better term – Western drum sounds in Nahy, and the disco-style percussion of Khattaba are mere add-ons to the essential sound.

The album does overall have a slightly more subdued feel than before, though. Perhaps it’s the smaller quantity of exclamations from Souleyman, or the inclusion of elements like a deeper, graver vocal on Nahy, Khattaba’s slightly gruff delivery, or Mawal Jamar’s plaintive, melancholy keyboard sounds. Anyone seeking nothing more than a good dance will undoubtedly still find much to relish here, from Warni Warni’s clatter of rhythms and fast-and-furious melody weaving through the track’s seven minutes, to the stand-out Khattaba – hypnotic, disco-inflective and utterly compulsive.

With lyrics in the languages of Turkey, Kurdistan and Iraq all included, with the express aim of engaging listeners throughout the region, Souleyman’s mission to bring a more positive view of his country, and its thrilling musical forms, to a wider audience continues unabated. At a time when so little that is warm, life-enhancing or joyous seems to be emanating from Syria, this – surely – can only make the wonderful music that he provides even more of a wonderful thing.